Not baked in Alaska 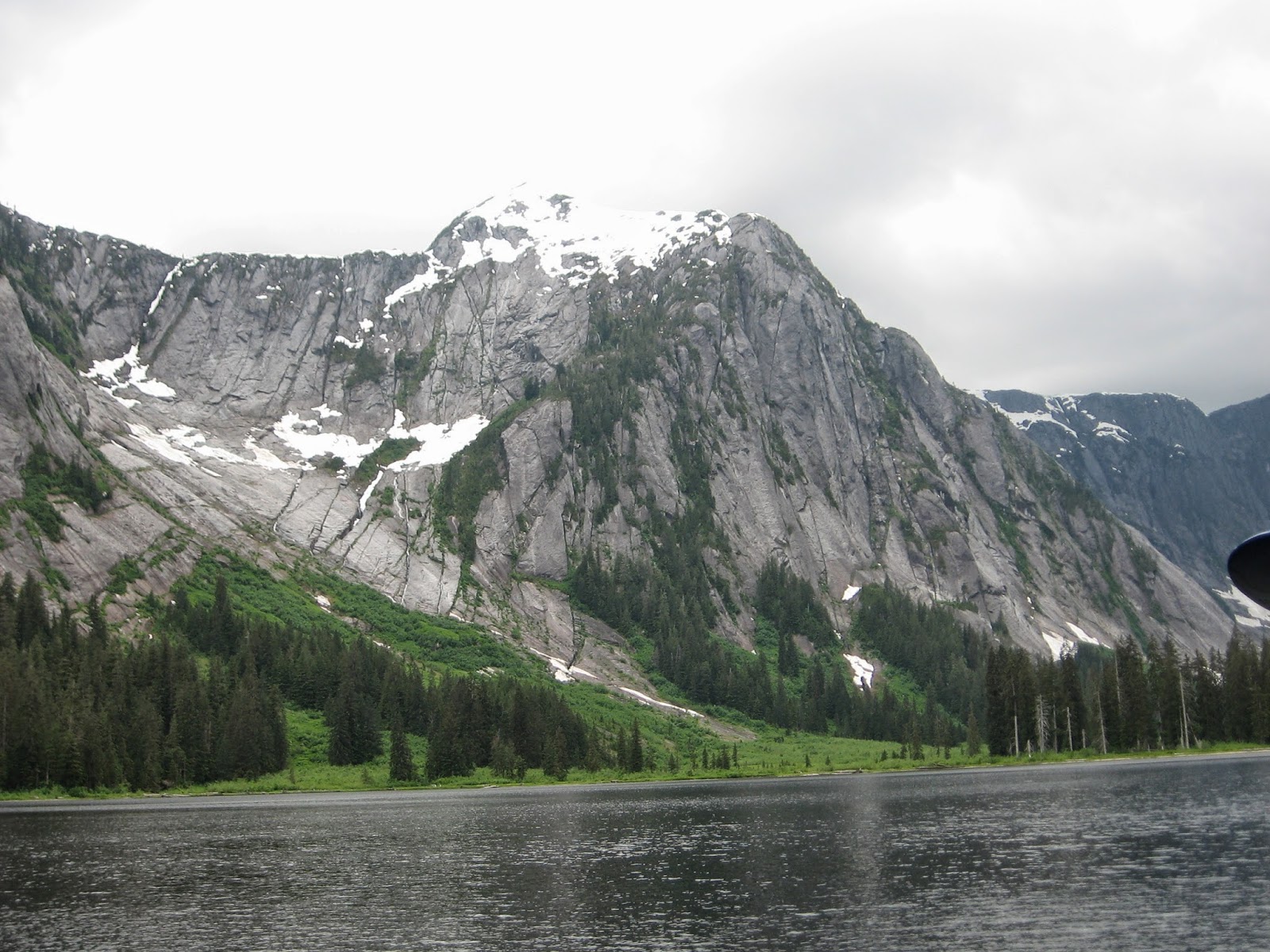 We are back from 12 days of vacation in Alaska. The blog's title refers to the fact that the temperature never did get above 70 degrees at any point. (Well, it is Alaska, one of nature's refrigerators.) But it didn't rain when we were out and about, and we did have Baked Alaska for dessert along the way.

You probably will be preoccupied with the picture at right, taken from a floatplane in the middle of a lake in Misty Fiords National Monument, one of the most spectacular places I've seen. (Click on the photo to enlarge it.) When you are done gawking, read a few observations about the trip, which consisted of six days on land and six days on-and-off a cruise ship that toured the coast line, while they are fresh in my head:

* Alaska really is the Land of the Midnight Sun, or close to it, in early June. The first sign came while flying into Fairbanks at 10:24 p.m., and having the sun come through the window of the plane at a blinding angle. The sun set there at 12:15 a.m. or so, and rose at 3:45 a.m. (By the way, Alaska is always four hours behind Eastern time, no matter where you are in the state. And it's a big state - two-plus times the size of Texas.) It took us a week to be awake when it was dark out, an interesting sensation.

* This was our first "packaged" tour, in which people with the same itineraries are bunched together for the first part of the week. That was a little odd, since we are used to going on our own timetable while on vacation and there is a certain feeling of being cattle along the way. Clearly, though, it's necessary - and we did meet a lot of nice people along the way. (Along those lines, the most repeated question on a tour like this is "Where are you from?")

The first thing we noticed involved photography. There were lots of camera phones in use to take pictures, which didn't surprise me. But I was caught off-guard by people to brought tablets to shoot the scenery. It looked, um, awkward. Valuable tip: If you are going to take a huge vacation, get a good camera.

A special mention goes to the woman who took a selfie of herself with a statue of a dog. Maam, I would have taken a picture of the two of you had you asked.

* Want to make friends quickly in a group? Some sort of apparel identifying your location works nicely. I work a Syracuse sweatshirt over regular shirts most of the time, and it turned out to be a conversation starter. When I saw a guy with the Packers' hat, I mentioned I was a stockholder. And so it went.

* Need proof that cell phones have taken over? We were on a train between Denali National Park and Anchorage, surrounded by, well, nothing but trees. A woman on our coach somehow got a cell signal, and asked one of her grandchildren all about the day's adventures in a voice that could have been heard in the Lower 48. It was probably worse than hearing about someone else's fantasy football team, without the opportunity to leave the room.

* One of my biggest questions beforehand was whether I'd need hiking boots. I opted to stick to sneakers, since we had no excursions through the wilderness, and that turned out to be a good decision. It's not easy to pack for a two-week trip, and free cubic inches are crucial.

* While tips are automatically taken from your account on the ship, no such system is in place on land. There are frequent reminders of that. On a train, an assistant in our car reminded us upon arrival that the lead guide had done a great job and should be "rewarded." On a plane, a small note was taped over the window that said "Tips are appreciated." Who knew Alaska had that in common with New York City?

* While on the ship, it was easy to tell where the major profit centers for the cruise company were. There are all sorts of invitations for drink specials and casino competitions. The library wasn't nearly as well promoted. OK, that wasn't a surprise. It was still a nice library, though, and we won a pin there for answering questions about Alaska's history one day.

* Speaking of profits, the ship had a relatively large jewelry store right on board. Admittedly, I am clueless on this particular subject, and know little about pricing. Were there bargains to be had? Search me.

Still, that was expected. But every town that had cruise ship ports also featured a stunning amount of jewelry stores in the midst of the usual t-shirt shops and ice cream stands. It was an odd mix in such places as Skagway, which has some town blocks restored to look like the days of the Klondike Gold Rush. I was told that it's a similar story in the Caribbean (the jewelry store, not the Klondike streets).

Meanwhile, every single t-shirt shop in Alaska has $49.95 raincoats marked down to $19.95. Every one. And the same make and model. It was an amazing coincidence.

* It's hard not to overhear conversations when waiting in line at the ship's customer service desk. Such stays are instructive, as the lead the bystander to want to scream out, "READ THE INSTRUCTIONS THAT WERE PLACED IN YOUR ROOM!" Our society obviously needs to read more, and not just when it comes to newspapers or blogs.

* Running is never far from my mind, no matter what the location. There wasn't time to do any in the first week of the trip, as the schedule was packed. But I did hit the treadmill a few times on the ship. It was a new experience to try to run when the foundation is swaying just a bit. All of a sudden, I had to hang on to the railing for support. That happened once in a while on the boat in general. You'd be amazed how tiring it is to constantly take that extra step to get your balance.

* Speaking of running, while in Skagway I saw an advertisement for a marathon that it was coming up for a few days. Therefore, I went into the visitors center and said, "I have an odd request - how do I get a shirt from the upcoming marathon?" I was directed to a store which was handling the logistics of the race, and the staff was thrilled that I was interested - one person told me all about the Girls on the Run program they have there. I bought a year-old marathon shirt for $10, a bargain by any standard.

Then a few days later, it didn't seem like a Saturday without a race. Luckily, the boat sponsored a 5-kilometer walk around the deck to benefit cancer research. About 35 of us walked to a middle deck and did 12 laps around the boat, and were rewarded with cookies and water. (No beer and pizza?) Even got a spiffy shirt out of it.

Be notified of new posts via Twitter @WDX2BB.
Posted by Budd Bailey at 5:40 PM

The obvious question to me, is what is your last state? My guess is Hawaii.

Put it this way - there is not a typo in that last sentence.