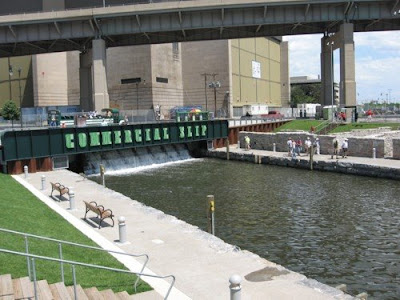 1. Took a trip to the waterfront last week to check out Buffalo's new Commercial Slip. It's a nice first step, with a great deck next to the waterfront that's perfect to watch the world go by on a nice day. Funny how people drove there to just walk around. People seem to enjoy waterfront access; you'd think we would have figured that out by now.

By the way, if you visit that area, make sure you take a walk around Memorial Auditorium one last time. I even took a picture. There is a fence around it, but it's still nice to see the place. I guess the Aud will be torn down starting in October. Most of us have a lot of memories of the building. Considering how much time I spent there in the 1970's, it was only fitting that I had a key to the place in the late 1980's and early 1990's.

2. On the way back from the waterfront, I drove past the site for the proposed downtown casino. As my wife and I circled the construction area, I said, "It's going to be tough to stop this from happening now." Three days later, the Senecas lost a court decision on it. There goes my Mensa membership.

3. Talk about ESP (and ESPN): In a column just before Wimbledon, Bill Simmons wrote: "If I guaranteed you that the 2008 Wimbledon men's final would be the best tennis match of the past 20 years, would you watch it? Amazingly, many sports fans would say no."

Naturally, the Wimbledon final may have been the best match ever, as Nadal beat Federer in five fabulous sets. It might take an American to care much about tennis any more, and even then it's easy to wonder. We'll see if the game gets a bounce from this finish. You can read all of the Simmons story, including some suggestions on how to improve tennis, here.

4. If you watch ESPN, and in particular "The Sports Reporters," you've come across some sort of advertisement for CDW. The guy in question is on a desert island, and he's worried about his computer security. So he talks on his computer back to the home office. I don't understand the problems faced by the character, and I don't understand the point of the ads. Makes me feel out of touch.

Speaking of ESPN ads, that head-scratcher was followed by the latest in a series of Verizon/ESPN ads, in which people are interviewed like they are the stars of a game, even though they simply watched highlights on their phones. One was named MVP of a baby or wedding shower, the other was interviewed after a ambulance ride. I'd prefer people in ambulances (either the patients or the medical care team) to worry about health problems and not fantasy teams, thank you.

5. Almost four years ago, Suzanne Taylor wrote an article on Joe Kolodziej and his attempts to bring minor-league hockey to Western New York. For starters, it is a fascinating story, so take your time and read it. What's more, I've heard that Joe is said to be unhappy that the full story is posted on the Internet. Gee, can't understand why. (Footnote: He even wrote me via e-mail and said to contact him directly if I wanted the full story. I think his discussion should be with the author.)
Posted by Budd Bailey at 6:03 PM