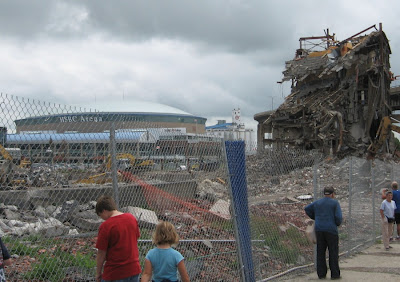 I think this is my last picture of the demolition of Memorial Auditorium. I try not to shoot empty fields.

There was a ceremony of sorts today on the site, as a variety of politicians gathered for the usual dull speeches. They did open the time capsule from 1939. According to the headlines in the three-cent paper of the day, the Soviet Union was acting war-like toward Finland. I smell trouble ahead there. Plus, they revealed the winning photographs in the contest to determine the best picture of the demolition. There was a general consensus that the second-place photo (which had "Buffalo" of "Buffalo Memorial Auditorium" just starting to come down at the beginning at the project) should have won.

Must have been 500 people there today at least, if you don't count the politicos who ruined their shoes by walking in the mud. I'd say 499 of them had cameras.
Posted by Budd Bailey at 5:14 PM