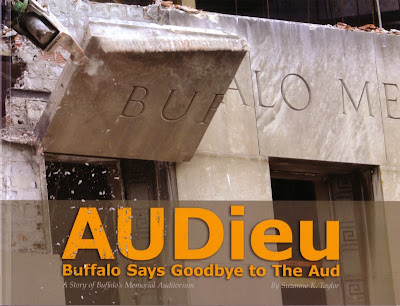 Material on books usually pops up in my book review site. But that wouldn't be proper in this case.

My fingerprints can be found in portions of Suzanne Taylor's book on Memorial Auditorium, "AUDieu." So you think I'm not going to like it?

I didn't do that much for the book. A few quotes of mine pop up in the text, and my name appears in the credits and in the index. Even that much, though, is something of a thrill. I've been in a couple of book acknowledgements over the years, but never in an index. My name is even spelled right and everything.

This is an interesting idea for a book. For those of you who don't live in Western New York, it's difficult to describe what happened in the community as the Aud came down. It was something of a summer-long wake. People trickled down to the foot of Main Street, all to take a look at the place for one of the last times. And, of course, to ask for a rock. (Public disclosure: I've got one myself. But I'm not telling where it is.)

"AUDieu" can be split into two portions, essentially. The first half is about the Aud when it was a working building. There are plenty of good stories about what happened there, what it was like to work there, what it was like to sneak in (apparently everyone but me did so), etc. It's easy to tell this portion works well; most readers who went to the Aud will find themselves thinking of their own stories about the place. At least I did.

There are plenty of great pictures, too. John Boutet, who is the area's leading collector of sports memorabilia, allowed Taylor to take plenty of pictures of his material. There are many shots of ticket stubs and programs too.

The second half centers on the demolition, with several pictures of various parts of the building coming down. You still may recognize many of the scenes, despite the chaos around it. ("Say, I used to meet friends in the Beer Garden for the second intermission...")

There's one little feature of the book that I missed at first that is a very good one. The corners have a series of small photos of the Aud coming down, almost day by day. If you flip through the pages from front to back, you can watch the demolition from start to finish. Or, if you miss the place, go backwards and watch the Aud go back up.

About the only problem with the book is that Taylor and the publishing crew obviously didn't have much time to get it out. It missed the start of the holiday shopping season by about two weeks as it is. I found myself wondering why pictures of the demolition were placed in the front of the book at times, where they seemed out of place. And one more reading for fact-checking purposes probably would have cleared up a couple of minor issues.

Taylor also takes the unusual step of quoting herself for sections of the book, including using her own thoughts in breakout quotes. I can't say I've ever seen that before, and goes against my usual belief that history books usually should be written from a distance if they aren't autobiographies.

Still, that's a sign of how personally Taylor felt when the Aud came down. And that's exactly the audience (or if you prefer, AUD-ience) she's trying to reach. For those who feel that connection to the Olde Gray Lady of Main Street, "AUDieu" ought to keep the spirit alive.

I had a chance to glance through it today and I put it on top of my list of books to buy.

I'm more interested in the history than the demolition, but that's because I was there quite a bit and have lots of shots of my own. Always nice to get someone else's perspective. Love the cover shot.