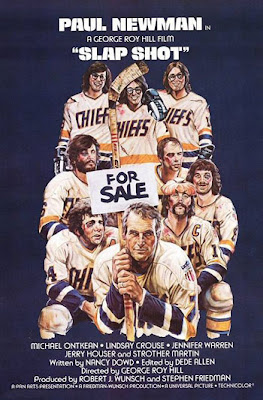 Sometimes news just comes along and blind-sides you.

Such was the case when I first heard about the upcoming demise of the Johnstown Chiefs.

This is a franchise of the East Coast Hockey League that has been around for several years. It's been known, though, for its association with one of the greatest movies ever made.

"Slap Shot" was an instant classic when it came out in 1977. It starred Paul Newman and was an absolutely riotous look at the world of minor league hockey. The script captured the world of bus rides and bizarre on-ice doings perfectly, to the point where every hockey player has seen it enough to memorize long stretches of dialogue. When the Anaheim Ducks won the Stanley Cup a few years ago, two coaches said to each other at the buzzer, "The Chiefs have won the championship of the Federal League!" -- right out of the movie. In a brilliant bit of counter-programming, Versus ran "Slap Shot" against the live broadcast of the USA-Canada Olympic game last week.

The team that was at the center of the movie was called the Charlestown Chiefs, but it was filmed in Johnstown, Pa. There are some local references included in the script, including the statue of a dog that allegedly saved part of the town.

When my wife and I were driving through the area a few years ago in early spring, I noticed on the calendar that the Chiefs were in town. I convinced her we absolutely had to go. The War Memorial is a classic hockey barn, as square as Tim Tebow, with the required 50-50 raffle during intermissions. We sat next to a father whose son had signed for a few games at the end of the college season, and watched Dad call Mom in Massachusetts when the son scored his first pro goal. It was all quite charming.

In the movie, the Chiefs' future turns cloudy when the owner decides she doesn't want to own them any more. In the real world, life is imitating art as the Chiefs haven't been drawing enough fans to make money. Former Rangers executive Neil Smith couldn't make it work. Attendance has slipped to under 2,000 per game, and a Greenville, South Carolina, group is betting it can do better.

I'd bet the recession hasn't been kind to Johnstown, and minor league teams tend to bounce around under any circumstances. Johnstown is the smallest market in the ECHL. Still, this one hurts. The Chiefs are in the hearts of every hockey lover. I even went to the team Web site, hoping to buy some sort of shirt. The page read, "under construction." Think that will be finished soon?

The Cubs should always be in Chicago, the Celtics should be in Boston, and the Chiefs should be in Johnstown. Let's hope the Hanson Brothers make it in for the final home game, at least -- unless they are playing with their toy cars.
Posted by Budd Bailey at 7:27 PM