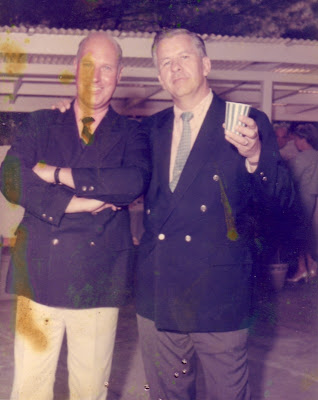 Remember how you thought your parents may have had a sense of humor, but never did anything too silly? And then someone came along to show that they weren't always like that? That applied to my father, a smart, responsible business executive by day. When the kids heard stories from his lifelong friend, we knew Dad had a goofy side buried in his past.

In this case, the best friend was Stewart C. Brown, "Stewie" to his friends. Mr. Brown died on Cape Cod this past weekend. At such times it's always a good idea to remember a departed friend like Stewie with some of the stories that were told when our two families got together -- sometimes under the influence of an alcoholic beverage or two. It sort of softens the image that the obituary gives of him, a respected member of the Brockton, Mass., business community as the head of Brockton Oil Heat, a former president of a country club, etc.

Stewie and Dad (left and right in the photo) were friends since high school or so. After being part of the "Greatest Generation" in World War II (Stewie in India and China, Dad defending such hot spots as Norman, Okla.), the two returned home after the war. The two attended the University of Vermont together, although it doesn't sound like they frequented the academic buildings very often.

Two stories live on about Stewie in Burlington. One time, he had been out rather late the night before an exam, and was in no state to actually take the test by the next morning. The teacher handed out the test, Stewie took a look at it, and then put his head on the desk.

"What seems to be the problem, Mr. Brown?" the teacher asked.

"Oh, in that case, you can be excused and take the exam some other time." That was actually a common problem among returning veterans. It just wasn't Stewie's.

Stewie, who joined the VFW post in Burlington with my dad because it was the only place they could drink on a Sunday, one night went out on a date with some young woman. His romantic overtures were rejected, so he opted to drown his sorrows. Then, he had to walk back to his dorm room. But walking was an adventure at this point, so after a while he had to crawl in order to make it.

Dad saw the door open later that night, and in crawled Stewie, with torn pants and bloody hands and knees. "She dumped me, Linc, she dumped me!" Stewie exclaimed.

Later on, Dad, a Navy pilot, took Stewie up for a plane ride in Brockton. The problem was that once airborne, the plane developed mechanical difficulties. So the two flew at a low altitude, following the street signs to a familiar landmark. Dad landed the plane on one of the fairways at Thorny Lee Golf Club in Brockton, with the club pro chasing them down the grass, yelling obscenities at them. I never did hear how they got the plane back to the airport.

I usually encountered Stewie on the golf course, caddying for my father as a teen-ager. Stewie had the best bogey I've ever seen in my life. He was playing a par-4 at Brockton Country Club. Stewie did not have a particularly reliable swing, and he mis-hit a tee shot. It went a few yards, hit a rock on the tee, skied high in the air, and landed near a tree behind where we were all standing. Stewie had to chip back on to the tee.

Hitting three, he launched a ball way right, way way right, up against some rocks near farmland. Taking a drop, Stewie smashed the ball through a couple of trees and safely on the fringe. One putt, bogey.

Stewie once had a hole-in-one, something that my father never had. But Dad got even by inviting Stew to member-guest tournaments in Elmira. The second hole at Elmira C.C. was a long, uphill par-4, with tree branches extending into the hitting area. Stewie never did finish that hole in several attempts; he could have used a saw instead of a 4-iron most times. Dad somewhat smugly gave Stewie a framed drawing of the hole for Christmas one year.

My friends got to know Mr. Brown a bit over the years at family functions. One time Glenn and I dropped my parents off in Massachusetts when we took a car trip to New Hampshire. Glenn's wit was typically on target about Mr. Brown's business interests in the 1970's.

"So, Mr. Brown, are you raking in those windfall profits?"

"I sure am, Glenn. Imagine, some people want us to lower oil prices these days. Ha ha ha ha ha."

"That's great. You gotta put the screws to the little guy."

Stewie always brought a smile to our faces when we checked in with him. I'll always remember having the unfortunate duty of telling him my father had died, and how he answered, "Oh ... I've lost my best friend." But Stewie still called or wrote my mom every so often, and he stayed on my holiday card list right through the end.

Mr. Brown lived to the age of 86. I'll miss the laughter he provided, and think of him whenever oil prices go up. He'd appreciate the gesture.
Posted by Budd Bailey at 11:42 PM