There are all sorts of adventures waiting for those who need something to do on a Sunday from a Western New York base. Here are two in Canada: 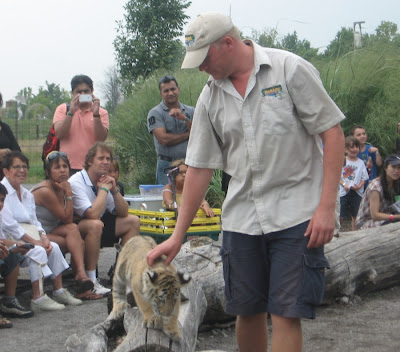 Safari Niagara seems to be virtually unknown on this side of the border, even though it is about eight miles from the Peace Bridge. The place has gone through a name change in recent years, which couldn't have helped, and doesn't seem to have an overwhelming amount of money to spend. The old name, Zooz, still pops up in certain places around the park a couple of years after the change.

Still, it's a good place to look at critters on an afternoon.

This is something of a cross between a nature preserve and zoo. Some of the animals have a good-sized amount of land for play, which is always nice to see. Others, like birds and monkeys, are in cages.

The best chance to see some of the animals close up, without cage bars getting the way of photo opportunities, comes in the group shows. The picture taken here is from Zoo-niversity, with lots of cute baby animals like a timberwolf, fox and the shown tiger cub. Awww. Hard to get the cub to stand still for a photo, though.

I had visited this place in 2004 for a 5-kilometer race. The second-best part of the race was that as I ran around the circular path of the facility, a moose came over to the fence to watch as I ran by. He probably was wondering what my hurry was. The best part, naturally, was that I was second in my age-group and thus won a medal. And even more naturally, the race was never held there again because of the small field. Any time I win a medal, it seems they cancel the next race. It's enough to give a mediocre runner a complex.

After visiting Safari Niagara, it was clearly time for refreshment. Sources had reported (newspaper guys like this sort of talk) that Cows Ice Cream had come to Niagara-on-the-Lake, Ontario, on the northern point of the gorge between the U.S. and Canada.

Again, not many Americans know about Cows, which was named the world's best ice cream stand in an article that was plastered on the front window. Speaking of advertising, they use a technique that is almost unfair. They make waffle cones right on the site, and then leave the door open. The smell alone draws passers-by in the door.

The ice cream seems loaded with ingredients, and the cones really are good. But it's also difficult to leave without buying something from the merchandise area. I thought the National Mustard Museum's stuff was clever, and it is. But this is in the same class. You really have to be a viewer of Hockey Night in Canada, with Ron MacLean and the well-dressed Don Cherry to get this joke: a t-shirt that reads "Cowch's Corner," with one cow in a normal suit and another cow in plaid (MacLean and Cherry, respectively). Sold. I passed up the Sidney Cowsby hockey shirt and a Moo Tube shirt. I also bought a couple of post cards with a drawing of a cow in a barrel, with the caption, "Common cow + barrel + Niagara Falls = Second thoughts."

Take a look at the link to get a better idea of what's on sale. There's a tribute to the Royal HoneyMOOn on Prince Edward Island.

I have had ice cream at a Cows in Vancouver, and one in Halifax. That about covers Canada. Nice to have one just up the road.
Posted by Budd Bailey at 12:39 AM