Man in the middle

I recently received an e-mail from someone through ancestry.com. He said that he had noticed that I was related to the Budd family that lived in Meriden, Connecticut, about 100 years ago. By chance, his grandmother knew them well. The 1910 census indicated they were neighbors on Howard Ave.

He said he had some photos from those days, and would be happy to send them to me. He did. One of them had a picture of my grandmother at around the age of 5, give or take a year, with her mother and part of the neighbor's family. I had never seen a picture of my grandmother as a child; it was amazing how much she looked like her daughter (my mother) at a similar age. 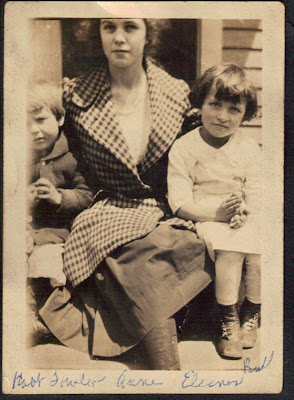 There were also four photos of one of my grandmother's younger sisters, Eleanor. I happened to have the e-mail address of Eleanor's son in the state of Washington. Although I'm a little vague on the specifics, I believe Eleanor's first husband was killed when some sort of robbery went horribly wrong a long, long time ago (1942?). Later, after remarrying, she supposedly put a roast in the oven one day, laid down on the couch, and died.

I sent the photos off to the son via e-mail, with a note explaining what they were saying that I didn't know if he had ever seen them or knew anything about them. He wrote back and said that he had never seen a photograph of his mother from when she was a child, so to see these at this point in his life touched him greatly.

That's Eleanor on the right. The photo dates back almost 100 years, I would guess, since she was born in 1912. Even though she couldn't conceive of being remembered this way, it's nice to bring her memory back for a moment. And I was glad to play a role in getting the photos to their proper destination.

Richard may receive a number of holiday gifts this year, but I'll bet this one from someone he'll never meet will mean more to him than any of them.

Be notified of new posts via Twitter @WDX2BB
Posted by Budd Bailey at 11:22 PM