Friends might say that I'm probably the last person to have a connection with any sort of artist. And they'd be right. I'm creative with a typewriter, not a paint brush.

But I did have a tie to Western New York painter James Litz, who died this week at the age of 61. You can read his story from The Buffalo News here. You can read my story here.

Back in 1994, I was working for the Cheektowaga Times, a suburban weekly and not to be confused with another of my employers, the Cheektowaga Examiner. My boss, Margaret, said she had just read about a local artist who was gaining a national reputation, and that he'd make a great story. She told me to go find him and write it. I believe I did a little whining; see the first two sentences of this blog for details. But Margaret was persuasive and firm. Yes, boss.

So off I went to talk to Jim Litz, and asked him to tell me his story. It took an hour, and it was a fascinating 60 minutes.

Litz had served in Vietnam and returned home, by his own admission, a mess. He couldn't hold a job for very long, and drank. Then his sister asked him to serve as a baby-sitter one night. Litz objected, saying that he didn't know what to do with kids. The sister said, paint with them or something. OK. They started painting until it was time for the young ones to go to bed. After that, much to his surprise he went back down to the basement to the paint set, where he worked some more. Soon he bought a paint set of his own, and kept at it.

Someone took a look at his work and realized that all of the houses in Litz's paintings were of a Southeast Asian nature, with a particular type of roof. That started the catharsis, and Litz painted his memories of his time in Vietnam, crying along the way. 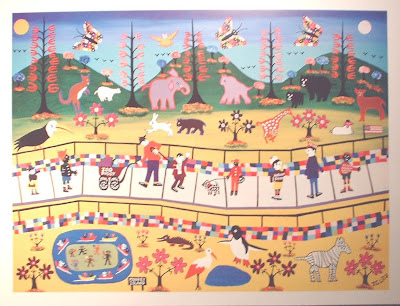 Eventually, he decided he wanted to work on happier scenes, so his work featured parks and baseball games and area scenes and the like. His was a very child-like style, filled with bright colors, and it was difficult to not look at the work and smile. You can see a copy of one here, copied from the site for Benjaman's Works of Art. Original works by Litz in some cases eventually went for four figures. He became functional in society again.

I came back to the office, filled with an enthusiasm that must have stunned Margaret. This was going to be a great story, I told her. Who is this guy, she no doubt thought. Basically, it was an easy story to write, too. I simply got out of the way and let Litz tell his own version of events. It was the longest article the Examiner may have ever printed, which got a questioning look from the owner, but those who read it all were fascinated.

Litz did two things that are unique in my journalism career. He asked for a tape of the interview, so that he could listen to it and try to prepare to give better interviews in the future. He also gave me an autographed print of one of his paintings, which I still have about four feet from where I'm typing this entry. A few months later, the article won a state-wide award, with the judges saying something like "a wonderful story simply told."

The newspaper story today has the epilogue of the tale. Litz stopped painting some nine years ago due to severe depression and diabetes. It might be an overstatement to say that the Vietnam War claimed another victim this week, but maybe not a large overstatement.

Even so, Litz helped teach me a valuable lesson in the journalism business that probably applies to a variety of other professions.

Sometimes, the boss is smarter than you think.
Posted by Budd Bailey at 7:26 PM

I happened onto a Vietnam War oral history interview with Jim Litz today (27Sep2020)
You Tube: https://www.youtube.com/watch?v=u6g50zR1d-k...and subsequently doing a web-search I found this blog.

This man's philosophical musings on the impacts of war are profoundly wise and heartfelt.

Thank you Inquisitive Mind for honoring his passing.

Is this blog still active?