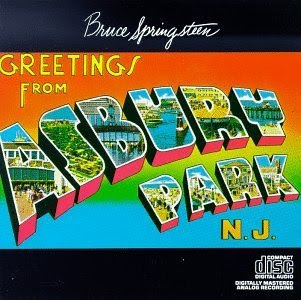 Word is spreading quickly about Bruce Springsteen's last show on his current tour, which will be next Sunday night in Buffalo. Springsteen has been playing entire albums on this tour, and the trend will continue with the surprising "Greetings from Asbury Park." He's never played this album, his first, live in sequence before, and he's never played one of the songs from it ("The Angel") live anywhere.

Here's the Newark Star-Ledger's take on the event. There are less analytical descriptions at backstreets.com and brucespringsteen.net.

So the question that's going to come up is, Will this be the last concert ever for the band? Or at least for a long while? Hard to say -- certainly an interesting choice of material for a closing night. I'm betting that the last song played on Sunday will be "Blood Brothers" -- just as it was when the Rising tour ended in October 2003 in Shea Stadium.
Posted by Budd Bailey at 10:54 PM