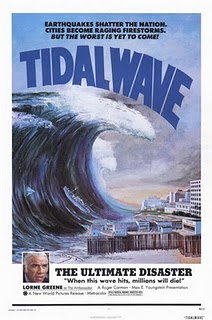 It's funny what goes through your mind at various times, particularly when faced with unprecedented disaster.

Back in 1975 or so, Roger Corman picked up the rights to a Japanese movie called "Tidal Wave." He chopped out some of the scenes, did some dubbing and added some scenes with Lorne Greene, and released it. The advertising did plenty of screaming and was all over local television for a few days leading up to its release.

In spite of that, I never went to see it, although the ads were the subject of jokes for a week. I just read a review of it on line (thanks for the movie poster image), and apparently it was bad enough that no known copies of it ever made it to home video. And there were few scenes of an actual tidal wave.

The real-life version in Japan this past week was a lot more serious. This footage from MSNBC is particularly chilling. I just wanted to tell the cameraman, "Get the heck out of there."

Visit msnbc.com for breaking news, world news, and news about the economy

Until I moved back to Buffalo for law school, that was the only movie I'd ever seen at the North Park theatre.