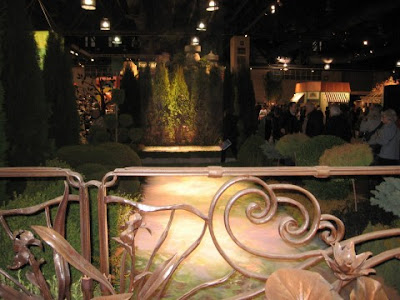 Can't say I've been to many flower shows over the years. In fact, I can't think of one.

But if you're going to go to one, the Philadelphia version is definitely the place to go -- if only to see the work of Michael Petrie. That's what my wife and I did this week; it was something of a retirement present for Mrs. Inquisitive Mind.

The Philadelphia Flower Show is held in the Convention Center, and it's the world's largest indoor show. It runs through Sunday. There are the booths from vendors -- a few hundred of them, in fact. Then there is some competition for plants, miniature designs, etc. (The judges' comments, by the way, are so pretentious that the judges must work dog shows at other times of the year.)

But the third of the hall that greets visitors is certainly the high point. Several special exhibits are set up in that area, all centered on a specific theme. In the 2011 case, the theme was Paris in the springtime. The bottom of the Eiffel Tower was recreated in it, and I particularly liked the floral representations of the movie "An American in Paris."

As for Petrie, he married a good friend of mine from college. (Kathye and I have writing in common.) Michael kept winning best of show awards in the Philly show, and has been written up all over the flower world. Finally, the show got smart and simply hired him to do the main exhibit. This year, he also did the exhibit for the presenting sponsor.

Now, what I don't know about flowers can fill the Convention Center. Heck, it could fill the Eagles' football stadium. But I do know creative, imaginative stuff when I see it, and it was pretty obvious that Michael's work was by any standard clearly ahead of anyone else's who showed off stuff in the building.

The picture is of a representation of Monet's garden in Paris. I'm not sure even how to describe the end of the display; it's something of a screen with a reflection of plant life on it. Whatever. It was clearly spectacular. (For more information on the work this year, click here.)

Michael is the owner of Handmade Gardens. He's gotta do something the other 50 weeks of the year.
Posted by Budd Bailey at 11:31 PM