Here's a story about one of the joys of writing a book that you don't hear much about.

After months of rewriting, updating, etc., I recently was all set with the manuscript of a story about Buffalo sports history. I had given it to the publisher, who had bunches of good questions and found a few errors. Then I went back and edited those changes into the manuscript - finding a couple of new mistakes along the way (what the heck is a defense coordinator, and how did I miss it so many times?).

But then, I considered things finished by Wednesday. The computer disk containing everything would be delivered Thursday morning. Ahhh. If there was a cold one in the house, I would have had it.

At 12:45 in the morning, I was reading a book on the Milwaukee Braves. There was a section on the signing of Henry Aaron. I knew that Aaron had been scouted by the Braves while playing in the Negro Leagues while playing in Buffalo. However, I didn't know where that double-header took place. I had checked the microfilm of the Buffalo News, but there was no game story. Aaron played for the Indianapolis Clowns, which didn't play home games in Indianapolis but rather had a business address in Buffalo. The News indicated the Bisons played a twin-bill at Offermann Stadium that day, so two more games by another pair of teams seemed unlikely.

"Bushville Wins!" had the answer. The Clowns played at Riverside Park. I had heard that some Negro League games had been played there, but this book showed that Aaron's big moment came there.

The couch was comfortable, and I was a bit sleepy. But the more information in the book, the better. I got up, went up the stairs to the office, and typed in the new fact. Then I copied the new corrected page over to my computer-file copy of the manuscript,  and resealed the envelope with all of the information for the publisher.

For those who are curious, the book does not have a title yet. Since I don't have a contract signed, I won't give any details about the business side for now. But it's essentially a done deal, and with luck it should be out for sale around Labor Day.

I'll keep you posted here and on Twitter about developments (including the ever-popular book signings) in the weeks to come. So start saving now.

Be notified of new posts via Twitter @WDX2BB.
Posted by Budd Bailey at 7:43 PM No comments:

The first step toward success

You may have noticed that Buffalo's sports teams are in the midst of a down period. Most people in Western New York certainly did.

The reaction to all of this losing has been predictable - more housecleaning, more trades, etc. Something else has popped up, which is equally annoying.

Fans have been calling for the local teams to think more locally. This can take the form of drafting local players for their teams' rosters, or for hiring ex-players for the front office. It's an obvious reaction to circumstances.

When Bill James was writing in the early days of his Baseball Abstract, somewhere around 1979, he wrote about the history of the Chicago Cubs. Now, the Cubs were not on the cutting edge of the bush to bring players of color into baseball. As a result, they slid into mediocrity and below rather quickly in the 1950s. As James said, when you start using discrimination as one of the factors of selecting talent, you are limiting your choices and are essentially helping yourself fail.

I've tried not to forget that. So when people were upset when Europeans starting arriving in the National Hockey League, I said the Sabres should embrace the additions to the talent pool. Think Japanese baseball players are a poor risk for signing purposes? Ichiro has worked out well on this side of the ocean.

This can be a tricky business. The Bandits for years had a strong Native component to their roster, and they won a lot of games. They also had a Native coach. Was the team giving an edge to that segment of the population when it came to roster decisions, or was it simply taking advantage of an underutilized segment of the lacrosse community? My guess is the latter, but that's impossible to judge completely.

The theory applies to front office hirings as well, of course. If you starting ruling out good people from being a candidate for a job, then you are hurting your own chances. If you have a shoe store and don't hire a good salesman for whatever reason, then you might find yourself with too many shoes in the back room at the end of the month.

We're all human, meaning that some people certainly would think twice about hiring the tattoo-covered Chris "Birdman" Andersen of the Miami Heat to run their Wall Street bank. But especially in the results-driven world of sports, inclusion is definitely the way to go.

After all, what do we have to lose, besides more losses?

Be notified of new posts via Twitter @WDX2BB.
Posted by Budd Bailey at 10:05 PM No comments: 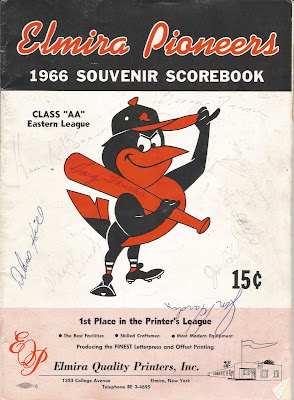 I've been going on quite a baseball journey for the last few years, one that dates back more than 40 years and includes a pro baseball player and a kid who watched him. It's worth sharing, even though I've told part of the story in a book review, of all places.

When I lived in Elmira in 1965 to 1970, the city had a Double-A team that was mostly affiliated with the Baltimore Orioles. You might remember that the Orioles were in the process of building some good teams around then, and some talent passed through Elmira on the way to Baltimore.

Dad's company did the civic-minded thing during those years, buying season tickets to the Elmira Pioneers. Here's the good part from my standpoint - hardly anyone from the company ever wanted to go to games. Therefore, I had a pretty good chance of going almost any time I wanted. First, it was with my Dad, who was always good about taking me. Then later I'd take friends, with my mother dropping us off (it was a 10-minute drive from home, tops) and then listening to the game on the radio so she could arrive in the eighth inning or so to pick us up.

Since I was a pesky 10-to-14-year-old in those years, naturally I bought a program and kept score for every game. It was a good way to learn about the game, even though by that age I had already figured out that the Red Sox would have to get somebody else to play left field for them when Carl Yastrzemski was done because I wasn't nearly good enough. (Note: they found Jim Rice, who was good enough.)

Give a kid a program, a pen or pencil and baseball tickets, and naturally he's going to hound players for autographs. That's what I did, over and over again. I only saved one of them, a 1966 edition which is shown above. I went over Delano Hill's and Jim Hardin's writing in pen, but also there are Darrell Johnson, Jim White, Bob Litchfield, Gary Fancher, George Farson, Hank McGraw (yes, Tug's brother), and Steve Cosgrove in pencil.

The next year, one of those I bothered constantly for autographs was a pitcher named Tim Sommer. He was 6-foot-1 and 155 pounds, probably right after lunch. Yes, his nickname was "Slim." I remember him as always friendly and willing to sign, which was appreciated. Sommer stayed in Elmira for parts of the next four seasons, as his records page indicates, which made him a constant part of my summers in Elmira before I moved to Buffalo in 1970.

Fast forward almost 40 years, when I had finished reading a book about life in the minor leagues. Afterward, amazon.com had a list of suggested books, and it included a memoir by Tim Sommer. That Tim Sommer? That Tim Sommer. I bought the book, read it and found it brought back a lot of good memories. I wrote this review.

I figured it would be worthwhile to get an autographed copy of the book, and managed to connect with Sommer - now living in Arizona. He no doubt was a bit startled to hear from one of those pesky autographed-seeking kids. Sommer explained in an email that the book was simply a way for him to pass on his memories of his baseball days, so I was quickly convinced that maybe my criticism of the writing/editing standards in that context might be a little harsh. In fairness, I didn't know the circumstances at the time.

On the other hand, the message of "if you're going to do something, you might as well do it right" apparently carried a little weight. Because he did have good stories to tell. Sommer made several fixes to the book and printed up some more copies, and sent me one of them nicely autographed.  I think I owe him a copy of my book that's coming out in the fall.

What's more, we still exchange emails almost five years since the initial "conversation." Tim is 70 now, and the book is still attracting interest. He wrote to tell me recently about how he sold almost 100 copies at a recent 50th anniversary reunion of a team in Stockton, California. Sommer also just sent me a letter he had kept from 1971 or so, explaining why he was retiring. It could have been written today, except the "big money guys" who receive preferential treatment from front-office types - even if they don't play like it on the field - make a lot more money now than they did then.

My baseball-loving friends and I all looked up to people like Sommer - literally and figuratively - back in Elmira. We all would have loved to at least been given a chance to play ball, but the odds were long just to get that far. The years have gone by since then, and that tends to level the playing field, to use the obvious sports cliche. Tim has gone from something of a hero in the Sixties to something even better almost 50 years later - a friend.

And to use a phrase from the Sixties, that's pretty neat.

Be notified of new posts via Twitter @WDX2BB.
Posted by Budd Bailey at 12:56 AM No comments: