(Mensana, the monthly newsletter of the local chapter of Mensa, usually doesn't discuss the events of the day in its pages. However, we thought it was necessary to address the mass shootings that took place in Buffalo earlier this month. For better or worse, I volunteered to come up with something. Maybe you'll like it.)

It was difficult to escape the aftermath of the mass shootings in Buffalo on Saturday, May 14. But it wasn’t for a lack of trying.

After a difficult week for everyone in our area, my wife and I drove to a social event with friends and others in Northern New Jersey. Usually when word gets out at such functions that we’re from Buffalo, someone says something clever like “Has the snow melted up there yet?” But this time the questions were different - numerous and serious. People wanted to know how close we were to the site of the incident, and how we and others in this part of the world reacted to it. That was no different from what happened earlier in the week, when people from various parts of our lives checked in. We even heard from a friend in Perth, Australia, which is as far as you can go from Buffalo and still be on land.

Like everyone else in Western New York, my reaction was shock, but not surprise. There are too many shootings like this one in America, of course, because one is too many. But every so often, one pops up in another city or town. One friend of mine works at Virginia Tech University, and spent a terror-filled day there. Another friend of mine lived up a hill from the supermarket in Boulder, Colorado, that saw a similar attack. These incidents arrive like, well, a virus – in unexpected places without warning. It was, simply enough, our turn.

On the way back, we drove past the town of Conklin, which is located on Interstate 81 south of Binghamton near the Pennsylvania border. It used to be the home of the Buffalo shooter, who won’t be identified so he doesn’t receive any publicity, even here. As we drove back to Buffalo, it was easy to imagine the assailant driving that same route over the course of nearly four hours, intent on returning to a Buffalo neighborhood that he previously scouted for a high percentage of African American citizens.

No one goes on that sort of drive lightly. Yet this 18-year-old managed to drive that distance while staying angry enough to complete his horrible mission. Where did all of the hate that fueled that drive come from? Certainly none of the shoppers in Tops that peaceful Saturday afternoon did anything to him, so we’ll never be able to understand his motivation. That means we’ll never be able to put this completely behind us, even when we just stop at a store for a gallon of milk and some bananas.

We have argued as a society over the causes of such actions, and what we should be doing to try to prevent them. It’s fair to say, though, that the current approach isn’t working. Maybe we need to start by figuring out why people hate others who are merely different from themselves.

In the meantime, we’ll be waiting for the next incident. Whose turn will it be then? 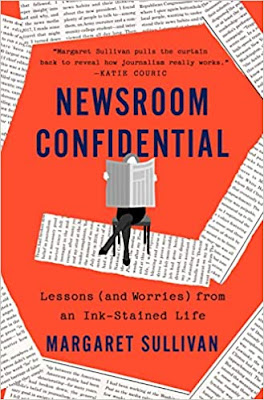 Ever read a published autobiography of someone you know?

It is an odd feeling. A couple of college friends of mine have published books that are more like memoirs, revealing pieces of themselves along the way. For the most part, I was pretty clueless about those pieces, so it was interesting to learn about those previously unknown aspects of their lives (at least to me).

That brings us to "Newsroom Confidential," by Margaret Sullivan, the media critic from The Washington Post. Almost everything except the skeleton of her life's work was new to me.

Margaret, you see, was my boss at The Buffalo News for several years. She moved on to bigger and better things, as her current title indicates. When I had the chance to obtain an e-copy of the book well in advance of the publication date, I jumped at the opportunity. The price I had to pay was a review of the book, so here it is.

Sullivan grew up in the Buffalo area and quickly landed at The Buffalo News after college and a short stint at the Niagara Gazette. But I first met her through softball, oddly enough. I was working for the Buffalo Sabres at that point in the late 1980s, and I played on a softball team that mostly consisted of Buffalo News employees. We weren't too good, but we were literate.

Sometimes the team would go out for food and drink after games, and significant others would show up. One of our players was married to Margaret at the time, and she joined us occasionally. It was always interesting talking to her on such occasions, even in a large group. So I started paying more attention to what she was writing in the newspaper, which at one point was a regular Sunday column that usually was the best thing printed on that particular day. I remember at one point Margaret received a promotion that would force her to give up the column. I said to her, "I certainly understand why you won't be writing the Sunday column any more, but I'm going to miss it." Her reply was along the lines of "Yes, it is a good opportunity for me, but I appreciate the compliment." You're heard of the smartest person in the room? Margaret always was the smartest person in the bar after games.

Eventually, I landed at The News in the sports department, ready to begin a run that lasted 23 years. Sullivan wasn't the editor in chief yet, but she soon took that step to be the boss of the newsroom. I probably could count the number of contacts with her that went beyond "hello" on two hands ... if not one. She worked during the day and I worked at night; besides, the sports editor preferred to run his own little fiefdom, and did so effectively.

Naturally, the part on life in Buffalo is the portion of the book that was of great interest to me as a former employee. I can report that only a couple of people came off as a little less than honorable. Most of those chapters are devoted to some of the issues that came up at the newspaper in that era. To be honest, I can't imagine it would be particularly interesting to those in the "outside world." But I'm not a fair judge of that, under the circumstances.

When Sullivan left The News to go to the New York Times in 2012, no one seemed to be too surprised. It takes plenty of effort and ambition to be the editor of a newspaper, and Margaret had plenty of both qualities. She admits that her personal drive played a big role in the end of her marriage, something that many of us guessed could happen back in the day.

At the Times, she became the Public Editor. As jobs in journalism go, this is an odd one. Sullivan was an independent voice in the newsroom, asking questions about how the Times went about the business of daily journalism and answering them on line and in print. It can't be easy to be the "scold" in the office - showing up at someone's door or in someone's email when something may have gone wrong in the process. I suppose an agent for the Internal Revenue Service knows the feeling.

The chapters on her years at The Times vary in interest level. Some significant and interesting issues came up along the way, and Sullivan reviews them here with depth and thoughtfulness. It's also fair to add that the material on the inner workings of the New York newspaper such as comings and goings seemed like "inside baseball" - more interesting to those inside the building than outside of it.

Eventually, Sullivan was worn down by that job - easy to see why - and jumped at the chance to work in the Washington Post's Style section as a media critic. It's quite fair to say it's a good niche for her, as she combined the smarts and the writing ability that were on display in her days as a columnist in Buffalo. Many of her columns have received national attention, in part because she has written points of view that no one else is saying.

And as you'd expect, the most interesting parts of the book are discussions about the issues came up in the five-plus years since she joined the Post. Obviously, Donald Trump hovers over much of those stories. His time in the Presidency busted several norms, to put it nicely, and caused journalists to examine how to do their jobs more effectively. We're still trying to figure out what the new rules should be.

Most of the autobiographies by journalists that I've read usually concentrate on the author's encounters with others. (Sports writer and broadcaster Dick Schaap prided himself on how many names he dropped in his book.) That's because reporters usually interact with interesting people on the outside world. I'm not sure if the autobiographical format was ideal for a story like "Newsroom Confidential," which is not like that. Most would rather eat and digest the hot dog rather than learn about how the sausage was manufactured. But, to further strain the analogy, some of the book is still pretty tasty.

In other words, Margaret is still the smartest person in the bar. We can always learn something from people like that.