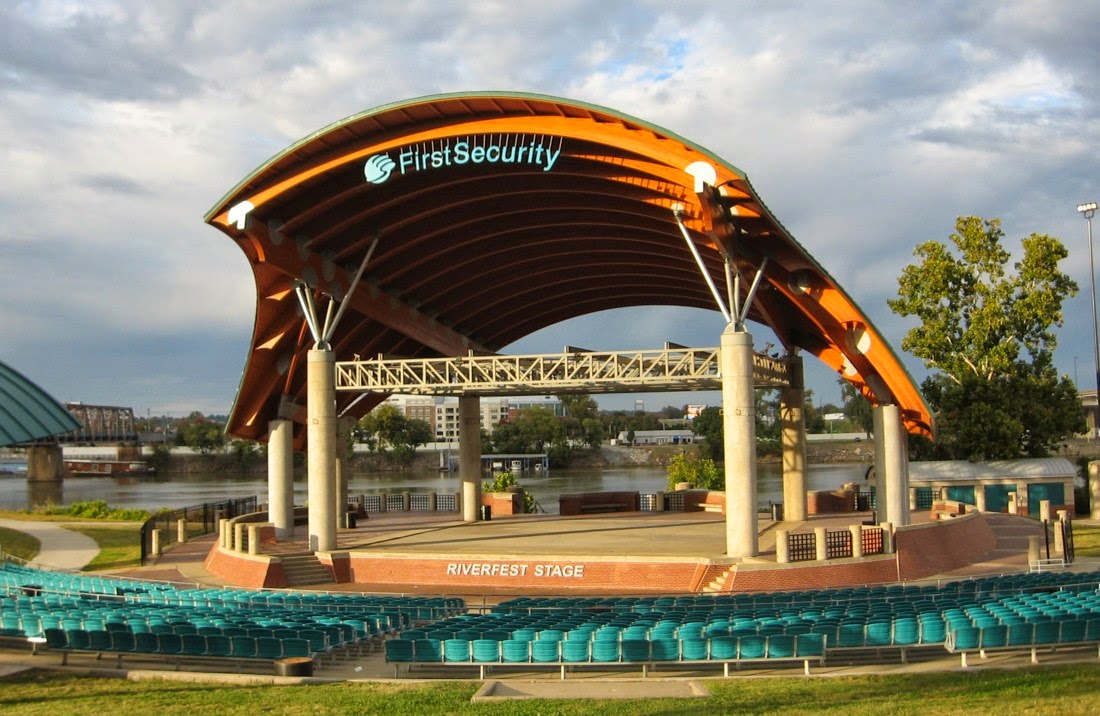 One of the best parts about traveling is that you find out what other cities are doing with their resources. In other words, it's educational.

Let's take, for example, the city of Little Rock, Arkansas. Little Rock has a riverfront, and civic officials there obviously have put some effort into turning it into a gathering place, instead of a swamp. There are all sorts of walking and running trails, and the nearby historic district is filling up with shops and restaurants.

This amphitheater, however, is the part that caught my eye. It's obvious a nice facility, with a good-sized covered stage and some permanent seating (there are some grassy areas surrounding it as well). Looks like a nice place to spend a summer day or night, doesn't it?

Now. Wouldn't one of these look good on Buffalo's waterfront ... somewhere?

My personal choice would be LaSalle Park, which might be the most underutilized or at least underrated piece of public property in the region. It's right on Lake Erie, and there is something of a stage there now. Yes, it would take a little money to do the stage itself, with other funds needed for such elements as parking. But it could turn into a magnet for people. If the amphitheater wouldn't work at LaSalle Park, there are other spots that could work as well.

I've seen other cities with subways have stops that are physically connected to major facilities, so that no one has to be outside in the winter in order to enter. Think about that the next time you walk outside from the ugly subway stop for the First Niagara Center on a chilly night for a Sabres' game. It wouldn't take much effort to construct a new station down the street a ways.

I've also seen cities in northern locations connect buildings through tunnels and skyways. That would be a natural here, but I'm not willing to be so ambitious quite yet. We've made some fast progress in Buffalo lately, and I'm willing to borrow ideas from any source to keep the momentum going. Everyone else should be too.

Be notified of new posts via Twitter @WDX2BB.
Posted by Budd Bailey at 2:04 PM No comments:

Let's take a look at what happens to most professional athletes when they hit a period of time when their play is below their usual or necessary standards.

If it's a short slump, the athletes might come out of a particular game in favor of someone else. If a hockey player keeps giving the puck to the other team, he'll take a seat on the bench for a while. When a basketball players misses eight straight shots, well, let him think about things for a while sitting next to the coach. If a baseball pitcher can't get anyone out, off to the showers ... until the next opportunity.

In any of those cases and almost all of the others, the players receives another chance to do well. If it goes on for a period of time, the baseball hitter will be dropped in the batting order or platooned. The football player will see spot duty and find himself on special teams. The hockey player will be placed on different lines and/or see his ice time reduced. Even golfers have a chance at redemption in upcoming tournaments.

But there is one big exception to the rule, and it centers on the single most glamorous and single most difficult position in sports - the football quarterback.

The Buffalo Bills quarterback was replaced this week as the team's starter, as Kyle Orton will take over on Sunday against the Detroit Lions. Manuel had not been playing well lately, and coach Doug Marrone announced the move earlier this week.

Let's review here. Manuel was a first-round draft pick in 2013 by the Bills in something of a surprise move, since other teams had him projected much lower. It would be interesting to know if Buffalo had planned to start him right away last season. Plan A might have been to start Kevin Kolb at the beginning of the year and give Manuel a chance to get his feet wet a bit. But Kolb suffered a career-ending concussion in preseason, and Manuel was Plan B. Manuel didn't look like the obvious answer at quarterback when he played last season, but then again he was good enough that we didn't know that he wasn't going to be the answer some day.

Fast forward to this year. The Bills traded two number-one picks to Cleveland for wide receiver Sammy Watkins, in theory giving Manuel a big-time target. Thad Lewis showed up in the spring, and the backup quarterback apparently had forgotten how to throw a football. He was quickly cut in camp. That left a vacancy at quarterback, and the Bills spent major dollars - something like $11 million over two years - to sign veteran free agent Kyle Orton. That's one expensive insurance policy, but an important one since Manuel was injured three times last year and in the NFL these days your season is essentially over if your QB goes down and you don't have a decent backup.

It didn't take an injury to force a switch. Manuel had trouble completing a pass beyond 10 yards or so, checking down to his running backs frequently. Shades of Trent Edwards. The team won two of its first four games, and it wasn't enough to keep the fan base happy. After defending Manuel after the Houston loss, Marrone announced a switch in starters 24 hours later. He might as well have dropped a green flag announcing "Let the speculation begin."

Were the Bills giving up on Manuel forever? The denials about that possibility quickly came from the team, but some quick research revealed that quarterbacks put in similar situations over the years frequently disappear for good. Check with J.P. Losman. The switch certainly prompted questions about whether the Bills were as sold on Manuel back in August as they said they were in public, and thus had this at least in mind since then.

And what about the pressure to win now? Certainly, another poor season would not go over well for a team that hasn't made the playoffs in this century. But throw in the fact that the AFC East looks pretty mediocre at best so far, and there's an opportunity to march into the playoffs relatively easily if things stay the way they are. What's more, the Watkins trade was designed to help the team immediately. Another poor season would bring another top-notch draft choice ...  to Cleveland.

Overshadowing all of that, naturally, is that the Bills are about to get a new owner. It's tough to know what Terry Pegula will do with the team when he takes over. He made some changes in the Sabres' front office, but he left the hockey department alone for a while. The people in the NFL are always under pressure to "win now." Still, observers have been guessing how many wins it would take to prevent a major housecleaning at One Bills Drive in the offseason. The most popular number is nine.

If this situation had come up in any other position, Orton probably would have come in for Manuel in the second half last week. Then maybe Manuel starts next week or maybe he doesn't, but no one is suggesting he's at the crossroads of his career.

But we're talking about a starting quarterback here, and the rules are different.

Be notified of new posts via Twitter @WDX2BB.
Posted by Budd Bailey at 8:36 PM No comments: