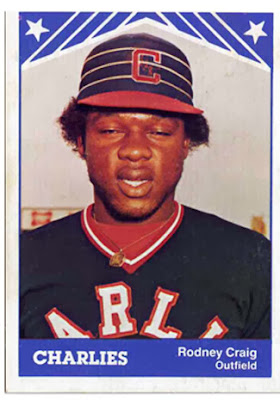 Former Buffalo Bisons' announcer Pete Weber passed along word that former Bison Rodney Craig had been murdered in Los Angeles on Saturday. I hadn't thought of him for a while, but he was certainly one of the most memorable personalities in Bisons history. A few stories came back from the depths of my brain with that terrible report, and they should be told so that his exit isn't the only way he'll be remembered.

Craig had one of those odd baseball careers that don't get much attention but probably deserve it. He was signed by the Mariners as a free agent in 1977, and arrived in Seattle for a September recall in 1979 - where he promptly hit .385. The Mariners were only in their third year at that point, and there wasn't much excitement connected with the team at that point.

Craig's moment in the sun didn't last long. He had a trial with Seattle the next year - 70 games, .238 batting average - and the Mariners sent him back to the minors. The outfielder bounced around a bit, including a stop in the Mexican League, and landed with Buffalo in 1986. He had gone from prospect to suspect.

I covered that team in my radio days, and that might have been the toughest baseball team I've ever seen. You think the '96 Sabres were tough with Ray, Barnaby, May and Boughner? These guys were really tough, and Craig was a leader in such activities.

I remember one game in the Rockpile in which somehow a fight broke out while the Bisons were on the field. Craig came sprinting in from right field to participate, showing the type of speed he rarely displayed while tagging up on a fly ball. Craig wound up to throw a punch at about the second base spot, and connected near the opposing dugout. Daryl Boston, Ivan Calderon and Joe DeSa were on that team as well, and it was good to have all of them on your side when hostilities erupted. Pete's Facebook posting has a couple of notes on how Rodney was a popular teammate.

Craig achieved ever-lasting fame one night when he was ejected from a contest. Suddenly, the story started making the rounds that Craig had talked the mascot into giving him his Buster Bison outfit for the rest of the night. Someone sure was filling out the uniform differently than the usual occupant. Being the fearless reporter I was at the time, I checked with a source in the clubhouse who shook his head up and down and said, "Yes, it was Rodney."

Rodney's best moment, though, came in a different game. At one point Craig airmailed a ball from right field that had fans behind the third-base dugout ducking. But later in that same game, Craig actually threw out someone on the bases. When asked about the play after the game, Craig defiantly said, "My arm is a legend in this league."

That's the type of quote that can come back to haunt you. Even the public address announcer at Bisons game started to call him "Rodney 'The Legend' Craig" when he came up to bat.

I even remember the quote spilling over to softball later that year. One time my team had a game, and a very overweight opponent tagged up from second on a ball hit to our shortfielder in right-center. I swear, Glenn could have sprinted in from his spot in the outfield and beaten this guy to third. Instead, he lobbed the ball to third base for the easiest double play in softball history. As Glenn went back to his position, he yelled, "My arm is a legend in this league."

Craig did some more bouncing after his time in Buffalo, landing in the Mexico League for a while. He apparently retired in 1990, and dropped out of sight. There were stories about drug addiction, so it wasn't a complete surprise that he wound up homeless on the streets of Los Angeles. Craig got into a scuffle with some people, and then was struck and stabbed. No one deserves that sort of ending.

At least, we'll always have one of his minor-league baseball cards, which is all over the Internet as one of the great poses in the history of this particular artform. It is shown above.

May the Legend live on.

Be notified of new posts via Twitter @WDX2BB.
Posted by Budd Bailey at 6:50 PM

I was the guy in the Buster Bison costume that night in 1986. I was in the clubhouse and they talked me into giving him the costume to wear out onto the field. Jim Marshall was pissed!