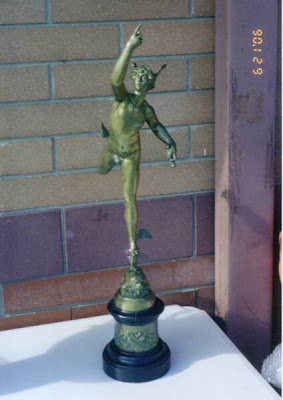 Sometimes bright ideas don't work out. I wrote a freelance story a couple of years ago on Tom Longboat, the 1907 winner of the Boston Marathon -- you can see the trophy here. I couldn't sell the story anywhere for the 2007 race, but thought it was an interesting enough tale to pass along. I had been storing it on my Homestead web site, but since that one will die soon it can find a good home here. Hope you like it.

SIX NATIONS RESERVE, ONT. -- It's the first morning of summer here on the Six Nations Reserve in southern Ontario -- a holiday known as Aboriginal Solidarity Day. The schools and some businesses have closed, and about 150 people of all ages have gathered on a perfect day outside the I.L. Thomas School.

They are here to honor Tom Longboat, the most famous person to ever come from this area. Longboat rose out of complete obscurity in less than a year to win the Boston Marathon on April 20, 1907, and went on to hold the unofficial title of the world's greatest distance runner.

While the event on the Reserve is called “The Tom Longboat Run," it actually includes walkers and bicycle riders as well. There's no competition; it's simply a matter of promoting fitness and a healthy lifestyle. After a half-hour ceremony that includes a speech about Longboat's life and a display of his four trophies that have survived through a century, the group heads out for a jaunt around the block ... a block that is a little more than six miles around.

As participants travel around the rolling course, they see undeveloped lands that look the same as they did when Longboat was running on these very streets as a boy. At the second of four intersections, the athletes change direction at Tom Longboat Corners. If they need inspiration at about 4 1/2 miles, they can see the site of the Longboat family's log cabin, which was only recently demolished. The course also is said to pass the location of Longboat's grave, which by Native tradition is rarely visited.

One of the runners this day is Ellie Joseph, who teaches physical education at Six Nations Reserve and lives there. Joseph had missed qualifying for the 2006 Boston Marathon by only a minute and 42 seconds, but rebounded a year later at age 52 in a May marathon outside of Toronto to qualify. Her time was 4 hours, 2 minutes and 25 seconds, beating the standard by 2:35. She'll be racing in the centennial of Longboat's record run in the 2007 edition of Boston's fabled race on Monday.

“Any runner from here has read about Tom. He's the epitome of goal-setting. To a runner, it doesn't get any better than that," Joseph said that summer day between accepting congratulations on her Boston qualification from other Longboat participants. “I did myself a favor by qualifying [for Boston] this year, because last year would have meant I'd run in Boston the year before [the centennial]. This happened for a reason."

Perhaps the roads of the reserve still hold a little running magic. They did for Longboat, whose story certainly ranks as one of the most remarkable of all the Boston winners.

“Longboat was one of Canada's best marathon runners, if judged against his peers on athletic terms alone. But he has a stature that reaches beyond the world of running," said David Blaikie, author of a book on Canadian runners, “Boston: The Canadian Story," that included a chapter on Longboat.

Born in 1887 with the Indian name of Cogwagee, the member of the Onondaga Tribe had almost every imaginable obstacle thrown at him. Longboat's father died when Tom was five, turning the family's economic situation from bad to worse. When Tom was 12, he decided he had had enough of a government plan that forced him and other Native children into church-run boarding schools. He ran away from school once, was caught at home, and ran away again. Authorities the second time didn't look for him at his uncle's house, and young Tom was forgotten about. His formal education was over.

As a teen, Longboat worked on area farms to earn a few dollars for his family, and he liked to run when he had some leisure time.

"There's a story about him,” Joseph said. “He was going down toward Caledonia [a nearby town], and somebody in a horse-and-buggy offered him a ride. He said, "No, I'm in a hurry,' and he ran off and he beat them.”

Longboat entered the Around the Bay race in Hamilton, Ontario, in Oct. 1906. To everyone’s surprise, he won the 30-kilometer race. Longboat then set his sights on Boston in the spring of 1907.

That year's race was 25 miles, and Longboat was considered the favorite despite his lack of experience. On a day that featured rain and a little sleet, he was in the lead 10-man pack in Framingham when a freight train crossed the route just after the leaders had gone past the tracks. The other 100 or so runners (accounts differ on the exact number) had to wait for almost a minute until the gates went up again and they could proceed.

Longboat slowly wore down the rest of the field. By the time he reached the hills of Newton, his only company was Charles Petch of Toronto. Longboat's burst at that point finished Petch in terms of winning, and Longboat had no more challenges in the last eight miles.

The next day's Boston Globe described the finish this way: “Amid the wildest din heard in years, Longboat shot across the line, breaking the tape as the timers stopped their watches, simultaneously with the clicking of a dozen cameras, winner of the greatest of all modern Marathon runs. Arms were stretched out to grasp the winner, but he needed no assistance."

The new champion finished in 2:24:24. Not only did Longboat win the race by 3:30 over Robert Fowler of Massachusetts, but he broke the course record by 4:59 … meaning he would have beaten the previous record-holder by nearly a mile. Johnny Hayes of New York, a future Olympic marathon champion, finished third, while Petch was sixth.

The din didn't stop after the race, either. Longboat went back to Toronto, his residence at the time, and was greeted with a parade upon arriving at the train station.

Blaikie wrote in his book: “A sea of celebrating humanity engulfed Longboat as he stepped from the train. The champion was placed in an open car, a Union Jack about his shoulders, and taken to City Hall in a torch light parade. Young women gazed at Longboat in rapture as bands played and fireworks exploded around him. A gold medal was pinned to his chest and the mayor read a congratulatory address, highlighted by an announcement of a $500 gift from the city for his education."

After Boston, he ran in the Olympics in 1908 and then turned professional, beating the world’s best on a regular basis. After serving in World War I, Longboat had a variety of jobs including work on farms in Western Canada. He was a postal worker and steel worker in Buffalo in the 1920's, and went to a job as Toronto's most famous garbage man from 1927 to 1944.

“Maybe all I'm good for now is sweeping leaves, but if I can help the kids and show them how to be good runners and how to live a clean life, I'm satisfied,” Longboat once told the Globe & Mail.

After World War II, Longboat battled diabetes and contracted pneumonia. He left Toronto and returned to Six Nations Reserve, where he died in 1949 at 61.

Since that time, Longboat's list of honors has grown. He was placed on a Canadian postage stamp in 2000. He's been inducted into the Canadian Indian and Canadian Sports Halls of Fame. The Tom Longboat Awards are annually presented to the best Native Canadian athletes of the year. Maclean's magazine in 1999 named him the most important Canadian athlete of the 20th century, putting him above hockey player Wayne Gretzky (who grew up in Brantford, Ont., less than 20 miles from Six Nations Reserve).

His saga remains most important, though, to the people of Six Nations.

“I always tell my kids about Tom,” Joseph said. “The girl that has the cups [from Longboat's career] brings them to my school each year. I guess it's because I run. There were a couple of little guys out there [for the Longboat run] who are in Grade Four. They know about Tom. It's just a nice memory.”

Joseph has tuned up for the Boston Marathon by running in the New York City and Honolulu races. She says she'll be buying plenty of memorabilia in Boston to commemorate the race.

"It [Boston] is the icing on the cake," she said. ‘Trying to qualify was the tough part. This will be a celebration."

Joseph will have plenty of support when she toes the starting line in Hopkinton on Monday. The Longboat Road Runners, one of Toronto's biggest running clubs, will have more than 25 runners at the race to help commemorate the 100th anniversary of Longboat's win. Member Tony Fletcher said, “We're proud & honored to be in Boston celebrating the achievements of one of North America's great past running heroes." A group from Saskatchewan will be in attendance. And Joseph says she'll be thinking of Longboat when she gets ready to start.

As Blaikie puts it, “A century after he sprang to fame, his story still resonates and his name still inspires."
Posted by Budd Bailey at 8:39 PM