I had the chance this afternoon to go into Memorial Auditorium one last time. I couldn't resist.

My friend Suzanne got me inside the construction/destruction site, as she has the job of taking pictures of the demolition for the company. Those of you who haven't been downtown lately might not recognize the front of the building: 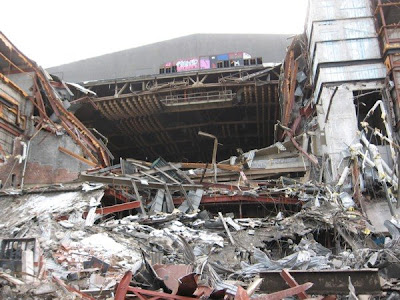 It's obviously a very odd feeling to be able to look inside the building and see the cylinders still hanging from the roof. Crews were knocking material down while we were there.

From there we headed for the other end of the building, went inside, up a ramp, past a hole that looked like the Stanley Cup had gone through it, and finally to floor level. It's pretty dark in there, except for the huge hole at one end, but a little photo editing came up with this picture: 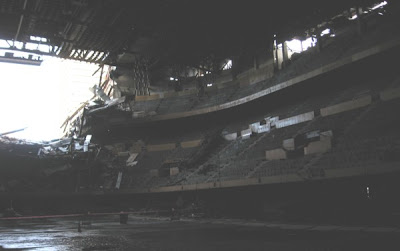 Finally, here's proof I was there with a brighter picture by Suzanne ... with the remains of part of the press box hanging on the bottom of the oranges in the background: 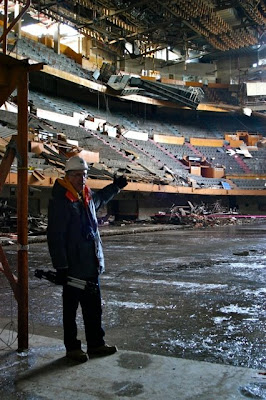 The actual floor is covered with some sort of frozen liquid -- not enough to use for skating, and not exactly worth a walk -- your shoes might melt. The seats are all gone. The walkway to the Sabres dressing room was open, but we only had one flashlight and I didn't think there would be much to see at this point.

After looking around, one thought struck me: "What's holding the roof up, anyway?" It's obviously the same supports that kept it up for years, but the light pouring through the top didn't make me feel completely confident.

OK, I've seen enough of the place and have no curiosity about going back. Farewell, old friend.
Posted by Budd Bailey at 6:42 PM

wow...great pictures.
Very strange seeing the inside from the outside. Kind of a public
autopsy.