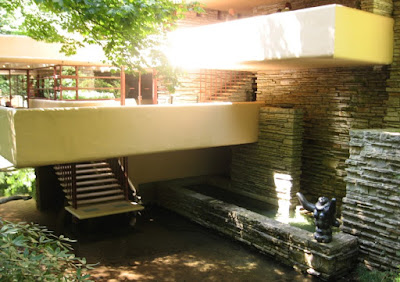 It's not easy writing a blog these days.

We recently took a trip to Fallingwater, the famous house in Southwest Pennsylvania. Trip is the operative word, since it's about 90 minutes away from Pittsburgh. If you are going, get off the Pennsylvania Turnpike, keep going south through Normalville -- the town where everyone in school has a temperature of 98.6 and a C average -- and you'll hit it.

Fallingwater is quite a place. You should go. It was designed by Frank Lloyd Wright for department store magnate Edgar Kaufmann (I love to use the word magnate). At first Wright thought about building a house right next to the waterfalls formed by the creek, but then he opted to have the water go through the house in a sense. The house has plenty of patios to take advantage of the scenery.

Yes, it's a spectacular location. The house has been left more or less alone in terms of furnishings since the Kaufmanns left the house to the Western Pennsylvania Conservancy in 1963. So there are plenty of books from the 1950's around, for example. Most of the furniture was designed specifically for this house, which has the effect of making the place more like a museum than a home. In other words, Fallingwater might be a great place to host a dinner party, or to visit as a tourist, but you might not feel comfortable pulling up a chair to watch a big game.

The Conservancy does have a few quirks about how it runs the place. It sends tours of 12 or so through the area every few minutes or so. The tour we took felt rather rushed, as if the guide was ordered to maximize traffic and by extension revenue. The place is very costly to maintain because of all the moisture in the area, but that attitude didn't exactly enhance the visiting experience. At the end of the tour, guests are placed in a converted carport and shown a DVD about the value of contributing to the Conservancy. This makes the tour's conclusion feel like a sales pitch for a timeshare in Florida, a unique feeling when visiting such a unique facility.

Photography isn't allowed in many portions of the house, which is understandable. You can take pictures on the paths around the house and on a couple of the patios at the end of the tour. Fine. But placed on the literature for the facility is a warning that photographs are not allowed on Web sites without permission.

That raised the question, can I place a photo on my silly travel blog, Road Trips!? Being the responsible guy that I am, I wrote the Conservancy and asked for permission. The reply came right back: "Our photography policy does not allow any commercial uses of Fallingwater images. Hope that helps."

Well, no, not really. So what's a blogger to do?

I wouldn't call this a commercial site, so I posted a picture of the place that came out relatively well (it's a tough spot for photos because of the differences in light caused by the forest). But, if you see this blog entry yanked off line sometime in the near future, you'll be able to guess why.
Posted by Budd Bailey at 11:17 PM