Here's a story filled with the Christmas spirit.

One of my distant relatives (great-great-grand-uncle, or something like that) is Ellwood Cooper, born in 1829. Cooper eventually lived in Santa Barbara, Calif., where he was the first American to manufacture olive oil and put in on the market for sale. Cooper later was the head of Santa Barbara College, and he also planted eucalyptus trees in the area that are still present today. Cooper died in 1918.

His old house was bought for about $4,000 in the late 1930's from a family member. It was somewhat furnished, and had some books in the house that Helen Louise Cooper had owned. My guess is that she's a daughter, although I don't have her in the family tree. Helen even wrote her name in the books as well as the date - March 20, 1905.

Here's the way it looks: 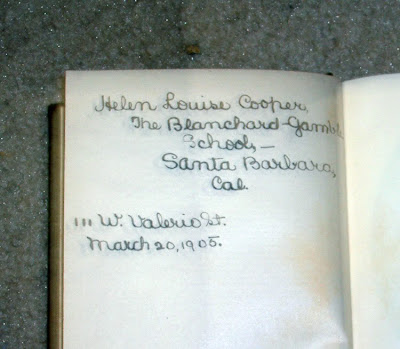 The relatives of the purchasers held on to the books for about 70 years, and decided to see if they could find one of Ellwood's relatives. They went on ancestry.com and found me. My cousin Mary loves this stuff, so a couple of books are being sent without charge to her by the purchaser's family. Mary, therefore, will have an unusual Christmas gift, sent through the generosity of someone she's never met.

I recently purchased a journal at an antique store in Los Angeles. The cover says "Helen Louise Cooper, Santa Barbara CA" It's dated from 1904-1908 and is less of a journal and more of a scrapbook filled with letters and tickets and programs for plays. It says she went to the Blanchard Gamble school in SB and the handwritting is the same as the one in your picture.