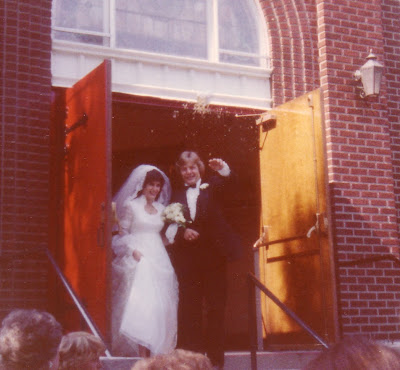 That's not a contradiction. Dawn, who passed away Wednesday night, displayed both qualities in large quantities throughout her too short life.

Dawn first came into my life when I worked at WEBR Radio. She had been the pride and joy of Medaille College, as I don't think she had a B on her report card while she was there. It didn't take Dawn long to move up the ladder in the news business. Not only was she smart, but she was so nice to everyone that it was difficult not to like her. I'm not sure I ever heard her swear, and the radio business sometimes gave people reason to do that if they needed one.

Along the way, she also showed plenty of interest in the sports field. This was in part because she had liked sports since she was much younger. I recall her telling one of the Sabres of the early 70's, "Remember those little girls who used to pester you around town for autographs? Well, I was one of those girls." I believe the player said something like, "Wow, you've really grown up."

Dawn also turned wandered into the sports office a lot for another reason. We had an intern by the name of Paul Hamilton at the time, and they seemed to get along pretty well. The younger people at the station all bonded quite well at that time. We'd sometimes after softball games go over to her house in West Seneca. Dawn was living with her parents, who were as gracious and friendly to us as people could be. We'd hop in the family pool to cool off and sip legal beverages on fine summer days.

Sure enough, Dawn and Paul got married in 1981; you can see them coming out of the church in the picture above. The wedding was noteworthy for two reasons. One, the minister was extremely pregnant; her due date was the very day of the wedding. Everyone sort of stared at her at the wedding, wondering if she was going to make it through the ceremony. (She did.) Two, of all things, MTV came on the air that day. Whenever the music channel celebrated an anniversary back in those pre-Jersey Shore days when MTV had relevance in our lives, Paul and Dawn's friends could say, "Oh, right, it's their anniversary too."

The tough part about Dawn went on display a little too soon in that era for anyone's tastes. It's been quite a while, but I believe Dawn got bounced around in an auto accident. The mishap caused some problems that doctors never could seem to completely fix. Indeed, the pictures I have of her from that era often show her in some sort of neck brace. She usually needed some sort of special chair to be a little more comfortable at work, and had a variety of healing contraptions at home. During that time, I never heard her complain, never heard her discouraged.

Dawn just adapted. While she had been a member of the co-ed WEBR softball team for a short time, she simply switched roles to scorekeeper. If you can make an impression in that job, Dawn did it. She quickly became known as the toughest scorekeeper when it came to earning a hit in the business. One time Greg Mott complained about not getting a hit on a play. When I pointed out that the ball went into the glove of the woman fielder and then came out, Greg replied, "The ball ripped the glove off her hand! Shouldn't that be a hit?"

Dawn came out to softball, week after week on different teams through the 80's and 90's, to cheer us on. Often she was our only fan. She shared in our occasional triumphs, and didn't laugh -- at least outwardly -- when our fielders treated the ball as if it were radioactive. Her level of devotion to Paul was obvious and was always returned by him, as he always carried a lawn chair and other equipment to the field and tended to her needs. The rest of the team, being manly men, wouldn't have expressed it, but appreciated just how loving a couple the two of them were.

When my softball days ended about 10 years ago due to age and a shift in job hours, I stopped seeing Dawn on any sort of regular basis. What's more, when I stopped covering Sabre games I stopped seeing Paul. So news about either of the Hamiltons was hard to come by. But I did get the devastating news some years ago that Dawn had cancer, and the prognosis was not good.

Still, I knew Dawn would attack the illness with a combination of determination and optimism. Whenever I ran into a common friend or a co-worker of hers at WNED, I'd ask about Dawn, and hear how she was working as regularly as possible and not complaining. My last gesture, if that's the right word, came in the fall when a couple of our former WEBR co-workers went into the Buffalo Broadcasters Hall of Fame. I asked Paul if Dawn would be up for attending, and he said she was pretty wiped out most of the time by the chemo treatments. So, I sent along the program from the event, hoping it would put a smile on her face. From there it was a matter of waiting for the crushing but not surprising news that came Wednesday. At least she's no longer suffering.

Life, it's said, isn't necessarily fair, and it certainly wasn't for Dawn. Someone that nice deserved a longer, fuller life. But she'd be the first to say, no doubt, that she had a husband, friends and family that loved her and was loved by her. Dawn probably wouldn't have been interested in trading lives with anyone.

(Donations can be made to Ebenezer United Church of Christ or Hospice Buffalo, Inc.)
Posted by Budd Bailey at 11:42 AM

Nice tribute to both Dawn and Paul. Well done, Budd.

A very nice piece on my old friend and (high school and college) classmate, Budd. You've painted a very accurate picture of Dawn. She was so consistent and constant...and I can picture her doing exactly as you describe in your anecdotes. You helped bring back not only fond memories of Dawn, but some good memories of WEBR. Thanks for sharing. I will be at the memorial in spirit.

Budd--great comments about a lovely person. I discovered Dawn's obit by chance, and was sorry to hear of her passing. She was always so kind.

I am heartbroken to read about this. Dawn was the only sane person we worked with. I was just thinking about her and Paul three days ago, in a meeting in Paris of all places, with the press officer for World Archery, who turns out to have been a Sabres intern in the early 90's. I mentioned you, and the discussion touched on my former career and people we might have mutually known... You know how those discussions go.

The best desk editor ever, and a damn fine human being.