Here's a story that was about 38 years in the making, and eventually leads to the Super Bowl that was completed on Sunday and climaxed when my high school pal Mark Murphy, the president of the Packers but much better known as my lab partner in advanced biology, was handed the Lombardi Trophy:

Way back in 1972, early in my senior year, I was put in charge of the weekly student newspaper at Clarence Central High School. It was a great vehicle for someone interested in journalism who was bursting with energy when it came to investigating non-academic aspects of the school. In other words, it sure beat worrying about my sinking calculus grade. In no time at all, I developed a literary "voice," met a lot of different people, and sometimes made them laugh.

Anxious to try out practically any stunt to call attention to the newspaper, I remembered something from programs from Buffalo Sabres games. The first star of a home game, if it were a Sabre, got three points in a season-long competition. The second star earned two points, and the third got one. The Sabres kept track of the point totals in the program, and at the end of the season awarded a "Star of Stars" Trophy. Since I was going to basketball games, home and away, anyway, I could pick the stars for all the games and create a contest.

I couldn't name the award "Star of Stars," of course. That would be cheating. And there was only one name at the time in Buffalo for such a basketball award.

Walt Hazzard had been an All-American while at UCLA, and he was a starter for the next several years in the NBA. In 1970, his Atlanta Hawks' team drafted Pete Maravich, and it took a season for the Hawks to realize that they had one too many point guards. And they weren't paying Maravich a relative fortune to be a benchwarmer. The Braves swooped in during the summer of 1971. They traded Don May, a 6-foot-4 small forward who was a little too small and slow to repeat the year that he had in 1970-71, and Herm Gilliam to the Hawks for Hazzard.

In the fall of 1971, Hazzard called a news conference. He announced to the media that he was changing his name to Mahdi Abdul-Rahman, although for some reason he was only known as Abdul Rahman. Hazzard had a good year in 1971-72 at 15.8 points per game. The next season, he seemed to age by about 12 years for no apparent reason. The Braves waived him nine games into his season.

For smart-aleck fans of basketball in Clarence, like me, it -- the name change, the sudden drop-off, the odd exit -- was quite strange and provided fodder for jokes. Remember, when you are 17, everything is fodder for jokes. So, the Abdul Rahman Trophy was born. 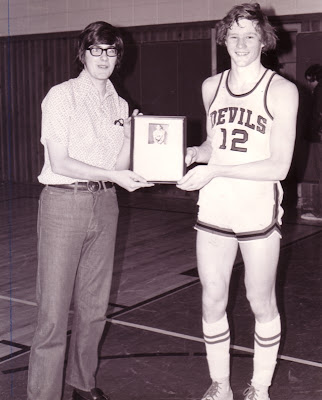 The competition went on through the season, and Mark won the title. I took a picture of Rahman out of an old Braves' program, typed out some sort of appropriate script, and put it together in a $2 frame bought at Woolworth's at Eastern Hills Mall. We had the "presentation" after a home game in late February (I looked it up). Jim Feldman, photographer for the school newspaper, took the picture you see here. As we lined up for the shot, I can still picture classmate Kris McClellan also taking a picture of us; maybe I was just surprised that someone else thought this was a history-making occasion. Kris showed me her version of this picture at a 2005 reunion.

It was all pretty light-hearted, although I was happy to discover when I visited Mark at home that the Abdul Rahman Trophy was on a shelf in his room, next to the other trophies he piled up over the years. Maybe he figured that it would be the first and last Abdul Rahman Trophy, which it was.

The years went by, and Mark put on quite a campaign to get last-minute votes for "most likely to succeed in the Clarence Class of '73." He played in the NFL for several years, won a Super Bowl ring with the Redskins as a player, worked for the Department of Justice, became athletics director at Colgate and Northwestern, and a few years ago became president of the Packers. I think we can declare a winner in the class election.

When the Packers reached the Super Bowl this season, three of Mark's classmates headed to Dallas for the Super Bowl. And they were all thrilled when he took the stage after the game to accept the Lombardi Trophy on behalf of the organization. The owner usually has that job, but the Packers are publicly owned (meaning Mark is one of the poorest men ever to be handed that trophy) and thus Mark had the honor.

After the game, the classmates were chatting with Mark about winning the Lombardi Trophy. One of them, Bill Irr, said to Mark out of absolutely nowhere, "I bet winning this game feels almost as good as winning the Abdul Rahman Trophy."

They laughed the laugh that only 40 years of friendship can produce. Then Bill asked Mark if he still had the Rahman Trophy, and Mark said, "Yeah ... somewhere."

Some people will be asking Mark for a look at his Super Bowl ring down the road, but they really should be asking about the Abdul Rahman Trophy. It's much more rare; he'd better go find it.

Congratulations, Mark. Let us know when you're ready to come home and turn the Bills around.
Posted by Budd Bailey at 11:43 PM

I see Mark played for the Devils before they moved to Jersey and started playing hockey.

I can't believe you left out the part about us singing "Abdulllllllll, Rachman, baby, Rachman to the hoop" to the David Cassidy hit "Rock Me Baby".