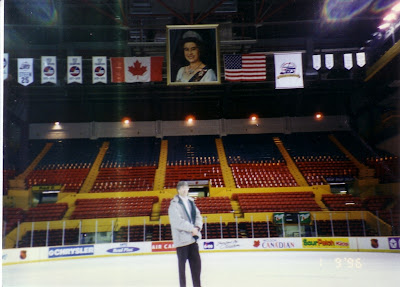 It's official -- Winnipeg is returning to the National Hockey League.

Manitoba's largest city is getting the Atlanta Thrashers next season. I'm not sure if that's progress for the NHL in terms of population, market size, etc. But I'm happy for the good citizens of Winnipeg.

The move sparks a couple of memories, since I went there once or twice while covering the Sabres.

I'll always remember Rick Dudley's speech about Winnipeg. Dudley played there at the end of his career. In fact, I think he wore #99 for the Jets.

When someone brought up Winnipeg, tales of cold weather followed. You think Minneapolis is cold? Winnipeg is 400 miles north of Minneapolis. When asked about the weather in Winnipeg, Dudley responded this way:

"The wind comes out of the Rockies. Then it sweeps through Calgary and out to the plains to the east in Alberta. The wind goes unchecked right throught the prairies of Saskatchewan. Then it heads into Manitoba. It makes a straight line for Winnipeg, and finally hits full strength at the corner of Portage and Main in downtown Winnipeg."

When I flew into Winnipeg for the first time, we took a bus from our hotel to the Westin downtown. I got off the plane, looked up, and saw the street signs -- Portage and Main. I believe I had a parka to keep warm, but I never doubted Dudley again.

I also got one of the great colds of my life in Winnipeg. That's not an easy spot when trying to cover a team on the road. Luckily, there are indoor tunnels between many of the buildings downtown. I believe I loaded up on every cold medicine in the province. Then I got dressed for practice, watched the practice, came back to my hotel room, took a nap, wrote my story quickly, and went back to bed for the next several hours. I couldn't tell you much about the city life from that trip.

What do most people remember most about the Winnipeg Arena in the Jets' days? The picture of the Queen at one end of the building. I guess it's not there now, so I am certainly glad I went down to the ice to take a picture under the Queen's gaze. It's shown above. Thanks to Pete Weber, ace photographer, for taking the picture. I returned the favor.

The good citizens of Winnipeg certainly love their hockey, and they will love their new team. I hope the economics work out in their favor.
Posted by Budd Bailey at 11:18 PM