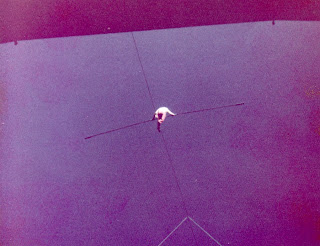 On Friday night, Nik Wallenda will attempt to walk across the gorge by Niagara Falls on a wire. It's fair to say this has created some buzz in the community. The event will be broadcast live on ABC, and the local news outlets have been failing over each other, if you'll excuse that phrase under the circumstances, to give the latest updates of the event.

It was 1975, and the Indians were playing a double-header at cavernous Municipal Stadium. (I believe you always have to use the word "cavernous" to describe the place.) The between-games "entertainment" was Karl Wallenda, who walked on a tight robe from the roof on the third base side to the roof on the first base side.

Our seats were in the upper deck well down the third base line. Karl walked more or less foul pole to foul pole, which put him pretty close to above us. I brought my Instamatic camera (do a Google search, kids), and took the picture you see above. That's the roof on top of the picture. Yes, he made it across safely. I still remember my friend Kevin, who looked up at Karl and said, "How can he do that?!" By the way, Kevin was afraid of heights at the time.

Karl was 70 years old at the time of his walk in Cleveland, and part of a family that specialized in such stunts. The Great Wallendas first arrived in the United States in 1928. Alas tragedy dogged the family. Karl fell off a wire between two ten-story buildings in Puerto Rico in 1978 and plunged to his death.

Daredevils have been associated with Niagara Falls since forever. Someone once walked across the gorge on a wire with equipment, stopped in the middle, prepared a meal, and then finished the walk.

I'm all for people having the right to do silly things as long as they don't hurt others. Still, it's easy to feel uncomfortable with the whole idea. That's because of the obvious question, "What if he falls and dies?" There was a pre-stunt debate about Nik's use of some sort of harness, which would prevent him from plunging into the gorge on national television but would make the walk more difficult. In addition, such projects rely on a certain amount of tolerance if not help from the government, since it's on public land and people will be coming to see it. Is this the sort of project that the government should be implicitly supporting?

It's all rather complicated, and it's easy to feel a little manipulated by all concern. But the daredevil knows that most can't look away. So good luck, Nik, and a hearty "safe travels" to you.

Be notified of new posts via Twitter @WDX2BB.
Posted by Budd Bailey at 12:45 PM

I watched Karl Wallenda cross the stadium after the Indians game of June 1, 1974. Game over, they turned off most of the lights except across the wire. It was electrifying. When he got half way across, he did a headstand! Crowd went nuts. I was 27; will never forget it. Here's a brief acccount: http://news.google.com/newspapers?nid=1755&dat=19740602&id=_Ug0AAAAIBAJ&sjid=6GYEAAAAIBAJ&pg=1563,366744