It will be the end of silly season in these parts.

If you're a voter, you've probably seen the infection in the past. Every so often, a primary or general election pops up that is particularly nasty. Chances are good that the race isn't important enough for the candidates to slug it out on television. Instead, they stick to direct mail literature.

The designated nasty race in Western New York happens to be in my district. Mark Grisanti ran as a Democrat for a Senate seat in 2008 and was beaten. Then he switched parties and ran as a Republican two years later, taking that same seat in a mostly Democratic district.

Trying to perform a balancing act like this -- keep the Republican Party happy but don't upset the mostly Democratic voters -- is difficult at best. Then Grisanti was thrown into the middle of a huge argument over gay marriage, and his vote became a key one. At the last hour, Grisanti opted to vote for the concept.

You knew there would be a price to pay for that vote, and the bill collector has come in the form of Kevin Stocker, who is running against Grisanti. Not only have Stocker and Grisanti been busy filling mailboxes with literature, but they have had help.

My favorite anti-Grisanti ad is above, with his face photoshopped onto a Seventies suit. The back reads, "Whatever this is, it isn't Republican. Mark Grisanti claims to be a Republican. His record shows otherwise.We need a return to Republican values. Grisanti isn't the answer. Give him a piece of your mind. Vote no on Grisanti."

Close behind was an ad that featured an Old West sign reading, "Gambling Hall - Leave Guns at Bar," which the caption, "Not the sort of sign we expect to apply to our politicians. With Mark Grisanti, we never know what to expect." It's a reference to a scuffle Grisanti had in a casino earlier this year.

There is no easy way of identifying the group that sent these and other mailings. However, the address is 2701 South Park Ave. in Buffalo, which is the home of the Erie County Conservative Party. You'd think it doesn't have a dog in this hunt, but it has endorsed Chuck Swanick for that seat. Swanick is in his own primary on the Democratic side against Mike Amodeo, and the Conservatives obviously think a Stocker win would help their own chances of backing a winner in Swanick ... even if they aren't too forthcoming about it in their literature. 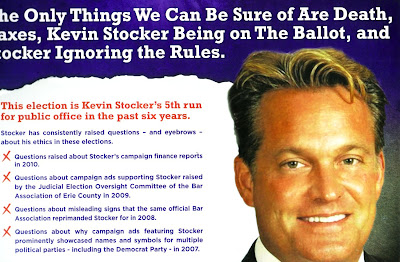 Meanwhile, the NY Unity Pac sent out the brochure to the right. (By the way, click on the ads to get a larger image of them. Sorry I couldn't get the far left side of the image, but you'll get the idea.) The Pac was created by Paul Singer and Ken Mehlman to help Republicans who voted for same-sex marriage.

Today, the mail left an ad with a picture of a wooden figure, and the caption, "Kevin Stocker kinds of makes Pinocchio seem ... well, truthful ..." No return address on that, either.

And on and on it goes. Both sides always say "the other guy started it" when it comes to this sort of negative material, and that they can't control what outside organizations are doing.

You hear, quietly, that despite the poor image that negative campaigning has, it works. But it never has with me. I tend to look for the worst ad whenever these nasty elections come up, and be sure to vote the other way. But I do know that when the primary is finally over on Thursday, I'm going to feel like taking a nice, long, hot shower.

And my mailman will be signing up for radiation treatments.

Be notified of new posts via Twitter @WDX2BB.
Posted by Budd Bailey at 4:17 PM