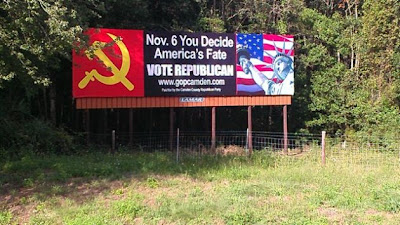 Ever see something on the road that makes you feel like rubbing your eyes in disbelief, although you don't because you are going 70 miles per hour on an Interstate and you have no desire to get into a major accident over a billboard?

This was such a time.

Earlier this week I was driving on Interstate 95, headed north in Georgia. When I got into Camden County, this billboard was on the side of the road. If you click on it, the image gets bigger. It was definitely a "Did I just see what I thought I saw?" moment.

I eventually went on line to see what was going on. I found this link to a story explaining that the billboard was indeed placed by the Republican Party of Camden County just north of Jacksonville. (Yes, it's a Mother Jones story, but the background story isn't up for question, and I couldn't find the one from a local paper through the search engine.)

Now let's forget the obvious implication of the billboard that you either vote Republican or you get your marching orders from some corner of the Kremlin that didn't hear about the fall of the Soviet Union.

Somebody thought it was a good idea for the Republican Party of the county to spend a lot of money to rent space on a billboard on an Interstate. That's probably expensive, and the sign would be seen mostly by people who are passing through Camden County to get somewhere else. So that's rather inefficient. Something on Main St. might have been better.

Some of those cars might be filled with people looking for a place to eat or stay. Last I looked, Democrats spend the same brand of money as Republicans. Wouldn't those Democrats be tempted to keep going into the next county instead of getting off at an exit?

Those who depend on tourism dollars in Camden County, even on a small basis, must be really thrilled about now.

Be notified of new posts via Twitter @WDX2BB.
Posted by Budd Bailey at 8:43 PM