When I moved to Buffalo in 1970, it was a great time for a sports fan to come to town. The Braves and Sabres were just getting started, and someone named O.J. Simpson was waiting to blossom for the Buffalo Bills.

As I met people in the Western New York area, though, I heard every so often about the good old days. The Little Three basketball doubleheaders came up, of course, even though attendance hadn't been that good since the 1950's. And the hockey Bisons of the American Hockey League were fondly remembered too.

The hockey Bisons played for more than 30 years, and went out as winners by winning the Calder Cup in 1970. Guy Trottier was the star of that Buffalo team, scoring more than 50 goals. Trottier was one of those players who was a great AHL player, small but quick, but someone who wasn't quite good enough to be an NHL regular in a 14-team league. He went up to the NHL for a while in the Seventies, but he was never better than he was here.

Trotter visited this weekend's "Farewell Old Friend" show about the Aud at the Convention Center. I naturally took advantage of the opportunity of the chance to have a photo taken with him. He was as gracious as could be, and seemed pleased to be remembered. 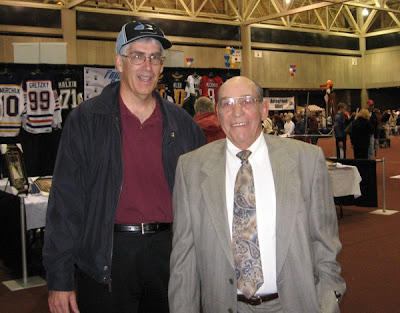 I always click an ad link when I visit your site. Today's took me to an April story about Hillary trashing Obama from Russia Today. How's a blogger supposed to make any $ with crap ads like that.

You look like more of the athlete, Budd, than does Mr. Trottier.