If you need something to do with a spare $12.95 tonight, here's an idea: You can watch Jose Canseco fight Danny Bonaduce on pay-per-view on the Internet.

There's a sentence I can't believe I typed. Here's the Associated Press story: 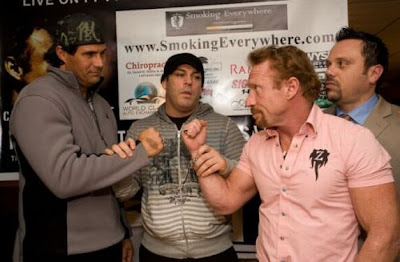 He needs a colorful nickname for his introduction as he enters a boxing ring tonight for a three-round celebrity match against Danny Bonaduce, a child star-turned-radio host. Before Canseco tries to pummel a Partridge, he wants a flashy name that fits the oversized personality of the former steroid-fueled slugger for the Oakland Athletics.

Canseco was a destroyer of reputations to some major-leaguers named in "Juiced," his 2005 book on steroid use in the game.

Canseco, 44, continues to seek the spotlight. The man who was once among the most feared hitters in baseball finds himself training to drill a D-list celebrity at an ice-skating rink in Aston, Pa.

Canseco has written two books, been in two reality shows and is taking his second swing at celebrity boxing; he was embarrassed by ex-Philadelphia Eagle Vai Sikahema in his debut. The 6-foot-4, 260-pound Canseco admits he needs the money.

The 5-6, 180-pound Bonaduce, who played Danny Partridge on the "The Partridge Family," hosts a radio show in Philadelphia.

"Let me be honest with you right now: I am scared," Bonaduce said on Howard Stern's satellite-radio show.

You can visit http://gofightlive.tv/ in order to see this classic matchup. Then, you can tell us all about it, because I'll be watching the Bandits at nll.com for free.

I just checked Vegas: Canseco is the 5-2 favorite over my look alike!