Nothing like a refreshing winter run. And I'll let you know when I find one.

Today was the day for the Penguin Run, an annual January event in suburban Buffalo. People can save five dollars by preregistering for this race, and they get a nice sweatshirt, a good buffet lunch, and a chance to help a good cause. The catch is, the weather can be a little, um, unpredictable. This is actually an action shot of the race, but the people are frozen in place. 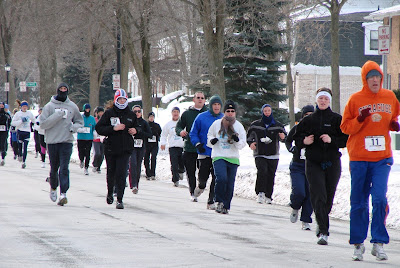 That guy in orange on the right, wearing a shirt from Syracuse's thrilling NCAA basketball championship in 2003, is not wearing a thermometer on his chest. It's actually his bib number and not the temperature. The temperature was much higher -- about 14 degrees. He's not winning either, but thanks to Diane for making it look that way in the picture.

Ever seen a bunch having more fun? I had so many clothes on, my legs had to re-introduce themselves to each other after the race. (Ba-dum-chuck) I've never run in colder conditions, so I needed to mark the occasion here for the permanent record.

We can only hope that Mr. Ed's Super Bowl Warm-Up Run in Middleport next week is warmer.
Posted by Budd Bailey at 12:14 AM

Hi Budd..
I recognized you out front. Great tradition, the Penguin Run!

Mr. Ed's was warmer, but that crazy wind off the corn field was still there.

Mr. Ed's is a funny event. The race doesn't seem to have gotten much bigger, but it is really well-run. My impression is that it is a very local thing, very Niagara County, but over the years I've been doing it it has become one of my favorites. Traditionally it's the ugliest shirt of the year, but they broke that streak this year too.