Blasts from the past

All the research I've been doing into Buffalo's sports history lately got me to wondering. Where exactly were Buffalo's first pro baseball parks?

Luckily, I still have a copy (actually two) of the late Joe Overfield's book, "The 100 Seasons of Buffalo Baseball." Joe knew everything there was to know about the subject, and I had the pleasure of talking to him several times in the Bisons' press box.

Armed with the book, I went exploring the other day. The first facilty was Riverside Park, on the block bounded by West, Fargo, Vermont and Rhode Island. The picture on top of this page is what it looks like now.

Well, it doesn't look like anyone will be yelling "Play Ball!" on that block in the future. It's a few blocks from the Connecticut Street Armory, and was used from 1879 to 1883.

By the way, the team apparently did some practicing at what we now call Riverside Park. There is a small sign across the street from the park, overlooking the river, that talks about the history of the place. The script mentions the fact that the Bisons worked out there, and that batters loved to run the bases while overlooking the river. (There's a Web site that says the sign is in the northeast corner of the park, but it's not there. Trust me, I looked.) 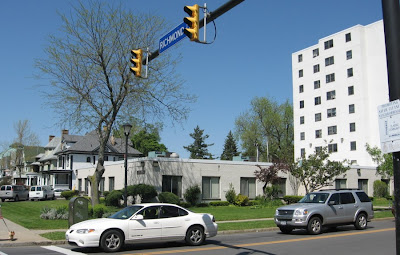 Then the Bisons moved several blocks. Olympic Park hosted the team from 1884 to 1888. It's at the corner of Richmond and Summer.

A second Olympic Park was built at Michigan and Ferry in 1889. It was rebuilt in 1924 and stayed in use as Offermann Stadium through 1960.

Just a thought -- would it be worthwhile to put up a little sign on the sites, honoring Buffalo's professional baseball past?
Posted by Budd Bailey at 1:10 AM