Sometimes a good idea for comedy can come out of nowhere, when you aren't expecting one.

For example ... in one episode of the late, lamented sitcom, "Buffalo Bill," starring Dabney Coleman and remembered for helping to launch Geena Davis' career, one of the subplots is that the television station was sponsoring a Jerry Lewis impression contest. So all throughout the episode, people would pop up saying, "Nah, nah, nah, nah, nah ... nice lady!"

I recently saw the musical "Avenue Q," which won a Tony as Best Musical a few years ago. It's something like the Muppets grown up, with puppets talking about such adult subjects as homosexuality, racism and relationships. Sesame Street was never so entertaining.

Two of the minor characters in the story are "The Bad Idea Bears." Let's meet them: 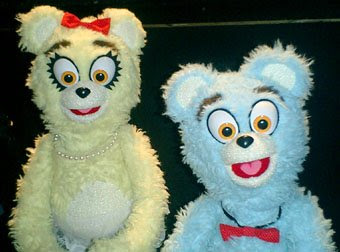 Now, before you go all warm and fuzzy, the Bears are something of a Greek chorus for parts of the play, but they don't have anyone's best interests at heart. Should be getting home soon before a big day at work the next day? The Bad Idea Bears suggest Long Island Ice Tea first. Got a little extra money that could go to something like rent? Buy a beer instead. No, buy a case -- save money.

This could have great implications for every day life. Do something stupid? Ask the boss for a raise and get fired instead? Suggest a family vacation in Baghdad? Just say you shouldn't have listened to the Bad Idea Bears that were hanging around.

At the end of the play, the Bad Idea Bears fittingly become Scientologists. This received quite a big laugh.