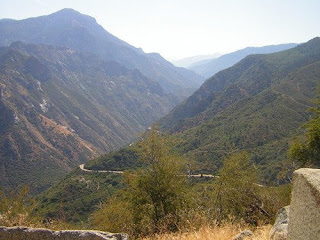 Sometimes there are surprises when you travel. Like the one I had while visiting California last week.

I took a trip to Sequoia and Kings Canyon National Parks in the Sierra Nevadas. Sequoia is famous for its big trees, as you'd expect, as well as some memorable views. Kings Canyon has two parts. One is on the West side, and has some more sequoia trees (picture a tree taller than the Statue of Liberty, and you get the idea). Then there's some space to the east before the park resumes.

That space was turned into the Giant Sequoia National Monument some years ago. Supposedly there were some nice views of the canyon in that part of Route 180, at least according to the ranger.

Then I got to those views. Whoa.

The road has been designated as the Kings Canyon Scenic Byway -- good move by someone. (See the picture above, submitted by summitpost.com.) I didn't know that the canyon was actually much deeper than the Grand Canyon. The road itself is about 30 miles long. It hugs the top of the canyon for a few miles, then slowly descends to water level. It stays on one of the forks for the Kings River for another 10 miles or so before ending. You can hike for a while from there, but you can't drive.

The National Monument doesn't have many obvious activities associated with parks. You can't go down the river, and there's no space for hiking. It is, however, one of the great drives in the country. If you are headed that way, make sure you take it.
Posted by Budd Bailey at 5:56 PM